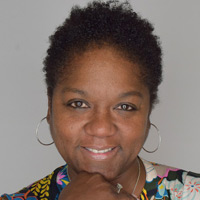 Michelle Duke has over 25 years of experience in the media industry working as a journalist, a trade association and nonprofit executive.

Prior to this she served as the vice president of the Foundation and was responsible for managing the day to day operations as well as developing and managing NABEF’s leadership initiatives.

Michelle developed the concept for the NABEF continuum of programs and created several successful initiatives including The Leadership Development Program, the Technology Apprenticeship Program and the Connections Mentoring Program. In 2007, she began managing the NABEF Broadcast Leadership Training program, designed to train executive broadcasters to purchase stations or more into more senior level executive positions.
Previously she held the position of vice president of Diversity and Development at NABEF, where she was responsible for the setting the strategic direction of NABEF’s diversity agenda.
Before joining NABEF in January 2005, Michelle was the director of Leadership Programs for the Newspaper Association of America. She started her media career as a reporter for the now defunct afternoon daily The Nashville Banner, which was based in Nashville, Tenn.
Michelle has been listed on Radio Ink Magazine’s Most Influential Women in Radio since 2011. In 2018 she was inducted into the Wall of Fame at the School of Media and Entertainment at Middle Tennessee State University. She received the Star Award from the National Capital Area chapter of the Alliance for Women in Media in 2009 and served on the national board of the Alliance for Women in Media for six years. She also served as the board chair of the Washington Literacy Center and as a board director and volunteer for numerous organizations.

Michelle received her Bachelor of Science in journalism from Middle Tennessee State University.