For the two keynote speakers for Reset, Reinvent, Revenue 2021, June 16-17, the clear common denominator is how much each of them learned during the pandemic and can apply now to make her or his organization better. 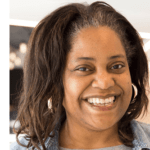 Denise Burrell-Stinson, head of WP Creative Team in the Creative Group at The Washington Post, and Scott Stuart, CEO, Turnaround Management Association, both emanate excitement for the opportunity to impart their wisdom to the association publication professional audience.

“One of the things we learned at the Post in 2020 is that there’s still an appetite for marketing content,” Burrell-Stinson said. “But it had to be done a specific way. One of the ways that we were able to get through that time and 2020 was by being in constant conversation with our audience. ‘What’s the best way to reach you? What’s the type of messaging that you want to know about? What do you believe has value?’

“They were like, ‘You know what, we still want to know about brands, but only if they’re helping people. We want to know that the brands that you’re working with have a POV on social justice.’ They want gender equity and racial parity all the way across the organization.”

For Stuart, a light went on about the way they were reaching out to members. “I learned more about human behavior in the last year than I ever put thought to,” he said. “Most people in the world are introverted extraverts… We learned in the virtual environment that we need to be more focused on that personality attribute.”

Basically, he said that few of us are comfortable walking into a room of 500 just knowing a few people. The virtual environment has given those people a kind of pass and comfort level to pursue more of what associations offer. We need to continue to give them that pathway.

“We have had a value proposition—with our 54 chapters and more than 10,000 global members—that as a member you can avail yourself of any program that a chapter has at the member rate,” Stuart said. “I’ve been hammering at that for a while. In the virtual atmosphere, people saw it, and it became a reality. So a member from a chapter in the UK and one in Toronto [will now attend each other’s events]. When people see that global reality, it gives them pride about the association. They now see the value of the greater organization that they’re a part of. And that pride cascades to everyone in the organization.”

Burrell-Stinson also believes in that pride and how that transcends internally as well to staff. “No one should ever feel that their sphere of influence is too small to make change,” she said. “If you’re working for a platform, a content creator, a digital magazine, the everyday results of your job are a contribution that ladders up to what the overall goals are.” Even in her days of fact-checking, she felt she was making a big contribution to the publication.

They both also mentioned the importance of creativity, not the first characteristic you think of for CEOs and brand marketers. “We’re looking to see how our creativity and ideas and how we reach audiences can be a driver of revenue,” Burrell-Stinson said. “When that’s done well, it’s a good marriage of business and creativity. We used to think that they have to live very separately, The person who was the creative mind was not the business mind, and the person who was the business mind could not be counted on to be creative. I’ve found that as absolutely not true. Everyone can embrace [those two attributes].”

Asked how the Turnaround Management Association was able to pivot so well to put on a successful virtual event, Stuart simply said, “Creativity. We know that a certain percentage will come [to an event] for education. We also know that people are Zoomed out.” They also want to have some fun; they’re used to going to Las Vegas for a TMA event.

“How can I give them a feeling that they’re not just stuck on Zoom,” Stuart asked. “We created 24 [short, interactive] sessions on industry topics, built a networking room, covered DEI. We had Colonel [Robert J.] Darling who was in a bunker with Dick Cheney on 9/11. We added Virtual Reality to get a casino experience and dueling pianos, had an illustrator doing drawings while sessions were going on.

“We created variety and”—Stuart slowed down here to accentuate—“actionable optionality. [We brought] you as close to in-person networking as you could ever imagine. Sponsors saw they got value out of it. The only downside was that because people expected the ‘same old,’ it caused us to market louder to get the message out. But once people saw it, they were our great evangelizers.”

That’s something all of us strive for. How much better is it when someone else talks you up, especially a member? That connection to the audience is something Burrell-Stinson came back to time and again during her interview. Before reaching out, she said it’s important—especially during these times—for staff to feel aligned with the organization’s message.

During the early stages of the pandemic, “I was one of those people showing up and asking, ‘What is my job right now?’ I can’t sit here selling. I really wanted to know that I felt right about what my job was.” Fortunately, the Post felt the same. “Let’s talk to our audience and see what they need right now,” she said.

“We did this deep, intentional engaging of the audience. ‘Tell us what it is you need to know. Tell us what’s helpful. Tell us what’s respectful. Tell us what empowers you.’ And they did. And when we listened to the audience we had our North Star. They told us what was going to work. When we had that information, we were actually able to take it to brands and say we’ve heard from this audience, they’re vocal, they’re smart and let’s do more than just market to them. Let’s really engage them on their terms.”

You will want to engage with Burrell-Stinson and Stuart on June 16-17 and hear more of what we can take out of the pandemic to help our organizations to Reset, Reinvent (and grow) Revenue.