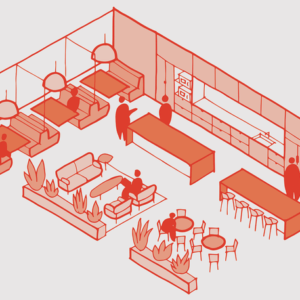 For anyone who has ever hosted or attended a party, it will come as no shock to you that the focal point of the office of the not-so-distant future—as imagined by longtime designer of office spaces, Clive Wilkinson Architects—will be a kitchen and lunchroom type space they’re calling The Plaza (shown here). “[It] is truly a social condenser.”

“We’re hearing over and over again from our clients that that’s one of the missing pieces of working from home, and that’s one of the things that’s going to drive people back to the office,” says Caroline Morris of Clive Wilkinson in a Fast Company article today. “It’s a place you can go and fill up your cup of coffee and run into a colleague or meet someone there, and have those spontaneous encounters that you really can’t have virtually.”

The phrase that might best sum up their overall vision is planned serendipity—the idea of accommodating colleagues who want and need to run into each other. The Avenue “reconfigures the typical straightaway office hallway to have nooks, seating and bar-like spaces where passing colleagues can stop and chat without getting in the way.” Also part of what they’re calling the 12 Building Blocks of the New Workplace are a Team Room, Pitch Room, Wellness Room and a Park, which could include outdoor space.

Here are 5 insights to the future of offices and working from home:

Remote in control? According to a recent survey from BCG, 89% of people expect to be able to work from home at least some of the time after the crisis ends. Just over a third (35%) of U.S. workers would switch to a completely remote model if they could. But as an article titled 10 Ways Office Work Will Never Be the Same on Vox’s Recode site points out, while remote work gives us greater flexibility, “the flip side is an increased feeling that work never ends… It’s tough to find work-life balance when the lines between the two are blurred.”

Not another meeting? Interestingly, time spent in meetings is more than double what it was early last year, according to a new report from Microsoft’s Work Trend Index. You can say that’s a natural offshoot of us being so disconnected, but then Microsoft’s January survey found that 54% feel overworked and 39% say they feel exhausted. So something has to give.

One’s sighs does not fit all. Employees returning to the office runs the gamut. According to Business Insider (in a gated story), Bloomberg’s U.S. workers are expected back at the office once they have been vaccinated. ViacomCBS employees will have the option of returning to the office post-July 4th at the earliest. At Dow Jones, offices will begin operating at about 40% capacity on Sept. 7. At Vox Media, no employee will be required to return to the office before September. The Washington Post will begin its return to the office on July 6, but only with about 10% of its overall workforce. And tech companies like Twitter and Salesforce have said they will accommodate remote work indefinitely.

Could a CRO be next? “If you think of other C-suite positions, you have a chief technology officer, a chief financial officer, a chief diversity officer,” Timothy Golden, professor of management at Rensselaer Polytechnic Institute, told Associations Now. “These types of positions are in charge of overseeing a range of functions within the area of their responsibility, so the chief remote work officer (CRO) would be much the same. They would be in charge of effectively overseeing remote work within their organization and ensuring that it is implemented effectively and work that is carried out remotely is successful.”

Offices will have to conform to new realities. Golden says that research he’s seen indicates that about 25% of employees prefer to be in the office all the time, 25% prefer a completely remote environment, and that remaining half want a hybrid environment where they work 2-3 days from home and go into the office the other days. “Companies need to re-envision their real estate strategy and re-envision the purpose of the office,” Golden said.

One thing is clear: Many more of us now believe in the value of remote work. “The past year has shown how successful we can be while working in new ways, and we know that you are interested in a future that includes flexibility to split time between working remotely and in the office,” Dow Jones CEO Almar Latour and Chief People Officer Kamilah Mitchell-Thomas wrote to employees.