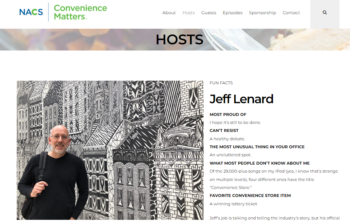 Jeff Lenard, vice president of industry advocacy for NACS (National Association of Convenience Stores), put up a chart of downloads of their podcast Convenience Matters. On the left we saw the previous year and short podcast titles with downloads of like 500 and 600. On the right were the latest podcast titles—many of them turned into questions: How Stuckey’s Is Bringing Back the Road Trip; Is the Great Resignation Over? What’s the Tipping Point for Gas Prices?—and a clearly more dedicated effort at snappier titles with triple the downloads.

“It wasn’t a huge content shift,” Lenard said. But moderator Blake Althen, co-owner and producer of Human Factor, who works with NACS on the podcast, said “It was everything around it [that changed].” The takeaway: little things matter.

Althen, Lenard and Kat Shamapande—director, professional development, National Association of Surety Bond Producers, and host of their podcast Let’s Get Surety—waxed thematically and entertainingly to a large gathering last week at the AMPLIFY Content & Marketing Summit during a session on podcasts.

“We needed ours to be industry focused,” Lenard said, after initial attempts at trying to be too broad. “We also decided to get two hosts for every episode, rotating them. It’s just better for the conversation to play off each other.”

They decided on a length of time—22 minutes; that’s about the average commute, he said, though not here in DC. “Or that’s maybe a usual dog walk. We were just thinking of the ways people might consume it now.”

But there was more. They took it on the road, to one of their large trade shows with 20,000 people. “These were face-to-face conversations with people you’re not going find anywhere else,” Lenard said. They also tied the podcast to a bigger initiative. “When we have speakers at an event, they also have to be on a podcast. You have a magazine article about you, you have to be on a podcast.”

So when Mike Rowe spoke at an event, that subsequent podcast gathered a few thousand downloads. And when William Shatner “went crazy when he learned he had to do a podcast, “then we couldn’t shut him up,” Lenard said. But after a COVID bump, they weren’t seeing sustained increases. “Let’s test and learn,” Lenard recalled. “We decided to focus on what the audience wants, not what we have. Let’s tell stories, focus on themes.”

So the whole month of May centered on road trips. A member of the band The Nighthawks appeared on a podcast to talk about their song Gas Station Chicken and played it on the podcast. “Take people who have followings and use that following to your advantage,” Lenard advised.

For Shamapande, the goal was to “get more information about sureties out there. This allowed us to get beyond our paywall to reach a broader audience that didn’t want to pay.”

They average about 1,000 downloads for two podcasts a month. For sponsorships, they’ll put it into various packages with other products. The prices vary from $7500 to as low as $3500. A sponsor can propose a speaker and topic, “but this isn’t infotainment,” she said. “We avoid anything heavily promotional. Sponsors love when we record it live at an in-person event.

“Before us [our audience] didn’t listen to podcasts. So it was an uphill battle in selling. We brought in a panel of past presidents who have political capital in the industry,” and that helped propel it. It’s made our industry more well-known.

Her podcast advice: “Make sure it’s more conversational—and fun. And don’t treat an episode as filling holes. As soon as you treat it like that, it will start sounding like that.”

Althen delved a bit into the sponsorship options:

And lastly, some more advice from Lenard:

He admitted it’s hard to monetize podcasts. They charge $3,000 for a full podcast. “That’s less than a full page ad in our magazine. I think we should charge $10,000; we have to do a better job of selling it and allow our sales force to talk about it differently [because] it’s like [the sponsor is] talking to an audience of 2,000 for 22 minutes.”