I was walking around an amazing exhibit recently—Sargent, Whistler, and Venetian Glass: American Artists and the Magic of Murano—at our National Portrait Gallery here in D.C. I was incredibly fortunate that the curator, Alex Mann, was giving a casual tour, and I could listen in and ask questions. It got me thinking about the stories we’re missing out on.

I asked Mann about one artist—Alice Pike Barney—who had a portrait of Whistler in the show. The description said she was a nineteenth century artist and Washington socialite, though I’d never heard of her. He said the museum had other paintings by her in “open storage,” that she built an incredible studio in Dupont Circle (that’s now the Embassy of Latvia), and she and her daughter were huge in the suffragette movement.

I researched more today and read that she also “helped build the National Sylvan Theater near the Washington Monument, the nation’s first federally supported outdoor theater.” That’s a hugely popular theater today! I had never read that. 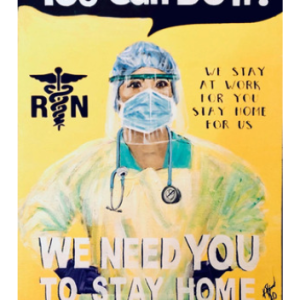 The point is she was a major player, yet she’s mostly ignored. There are so many stories to uncover and cover in all of our niches—especially of women. One of the 2022 Neal Award winners, for Best Profile, is titled A Tribute to Female Essential Workers by Rachel Engel, senior associate editor of FireRescue1.com and EMS1.com for Lexipol. A nurse and artist, Kate Bergen, “created an entire movement dedicated to honoring female essential workers, with a nod to the Rosie Riveters of World War II—even receiving a blessing for the project from an original Rosie.”

Though Women’s History Month and Black History Month are over, and National Hispanic Heritage Month and other important landmarks occur in the fall, the focus should be year-round. Here are some tips on finding more diverse and uncovered stories, plus new sources and speakers:

If you want to diversity your speakers and /or sources and profiles, the most effective thing you can do is diversify the group whose job is finding them. “Panels tend to mirror the teams that create them,” writes Ken Sterling, EVP and CMO at BigSpeak Speakers Bureau, in an article for Northstar Meetings Group. “When you have all white men picking a panel, the panel tends to be all white men. But when you add diverse people to the planning committee, the panel will start to represent a more global view.” Committees for story ideas can be similar.

Look at job titles. “We launched an association that exceeded our expectations in a few months,” Elizabeth Petersen, project director, Simplify Compliance, once told me, referring to the National Association of Healthcare Revenue Integrity. “We were looking at registrations for events and one of my product people noticed, ‘There’s a new title popping up, and we had never seen this title before’…” Advanced outreach and marketing followed, and a successful organization was created. Look for unique titles—there are new audience, diversity, and people and customer happiness titles that could lead you to interesting new folks.

Ask around. Dan Fink, managing director of Money-Media, has been awesome when we’ve needed recommendations for a webinar or session—or a new story idea. One time that led me to Hannah Glover, group managing editor there who did a great presentation. Another time we found Emily Laermer, a managing editor, who at that time was the data visualization editor who spoke about infographics, such a big topic now. Who’s the Dan in your audience and membership? Do you need a special committee to help?

Lean on your awards and future leader programs. I get so many ideas through our award winners—interesting women podcast hosts, young diverse chemists, etc. Last year, the American Association for the Advancement of Science (AAAS) won a Silver EXCEL Award for Rising Up, focusing on women scientists. That led me to Emily Petersen, their ultra-talented senior photo editor of Science Magazine. Look for her in a webinar in the near future. Our award winners are up for all members to see—here are the Neals—as are most organizations’. “[Our] Future Leaders program has provided us a way to connect with the next generation of leaders in the industry we cover,” George Yedinak, co-founder, executive vice president, Aging Media Network, wrote to me last year.

Think expertise. “It’s important to feature women talking about their expertise, not gender,” said Tracey Shumpert, VP of membership and programs here at FISD, a division of SIIA. She’s put together all-star panels of women “who we would normally just use for keynotes to talk about the future of our industry, and that’s been very successful.” Those talks are not specifically publicized as a women’s group event but rather “All-Star Senior Executive Panels.” Panels such as these can also unearth other hidden stories and people who might be acquaintances and colleagues.

Go through LinkedIn. I graduated from Rutgers University and belong to a couple of college groups on LinkedIn. One day, Sherri L. Smith, editor in chief of Future’s Laptop Magazine, came up in one of the conversations. The first Black woman to be editor of a business or tech magazine, she became a wonderful guest on one of our webinars, and I’ve followed her ever since—including a fun and informative discussion on video game releases last summer. LinkedIn has all sorts of groups like that.