We are fortunate here in Washington, D.C., to have a number of world-class museums. One of the lesser known but most invigorating ones is the National Museum of Women in the Arts. On Monday, they—as did many people and institutions around the world—celebrated International Women’s Day. The NMWA is a special place geared, in one way, to account for centuries of inequities in the art world. I recall hearing the director of the world-famous Ufizzi Gallery in Florence tell us about his biggest surprise in taking over: the literal treasure trove of paintings in their archive by women artists spanning centuries that had never been shown!

But in another way, you simply want to energize a segment that is under represented.  A successful example of this is SIIA’s own Financial Information Services (FISD). Their Women’s Group continues to thrive, leading to more prominent women speakers for their events and more women becoming part of the fabric of the overall group. Tracey Shumpert (pictured) is the VP of membership for FISD. With the FISD Women’s Group hosting a Fireside Chat with Dr. Alexandra Hachmeister of Deutsche Boerse on Tuesday, March 16, I asked Shumpert about the success of that group in boosting membership and engagement. 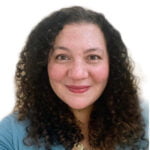 “There is definitely interest from women in our group such that we need to create spaces tailored to women. So I don’t see our women’s group going away,” she said. “It’s popular, people talk about it, they show up and enjoy it. It also allows women to be in a comfortable environment. While this industry is getting more diverse, women are still the minority. These are chances for them to get together as the majority for a change.”

We’ve all seen those studies that say that it’s harder for women to be heard during meetings. In 2019, the annual McKinsey and LeanIn.org Women in the Workplace report found that half of the surveyed women had experienced being interrupted or spoken over, and 38% had seen others take credit for their ideas. Online, these imbalances are only amplified, according to Deborah Tannen, professor of linguistics at Georgetown University who has been studying how men and women speak for decades.

“FISD’s Women’s Group has been around longer than I have here,” Shumpert said. “It’s something that our members have asked for. We’re not in-person unfortunately right now, but when we were we would have one luncheon in New York and one in London where we filled every seat [capped at 90] and more. [As for who we invite,] we’ve taken a few different tacks. At first we didn’t explicitly try to get men to attend and then we did. Either way, the vast majority who showed up were women.

“I also think it’s important to feature women talking about their expertise, not gender. In December we put together what we considered an all-star panel of women who we would normally just use for keynotes to talk about the future of our industry, and that was very successful.”

That talk was not specifically publicized as a women’s group event but rather an “All-Star Senior Executive Panel.” “We’ve had success exposing our members to women speakers in senior management so they can ask questions, and that also gives women a chance to see someone who looks like them in upper management,” Shumpert said. “If you can see it, you can have a better chance of envisioning it for yourself.”

Shumpert experienced that firsthand. Her initial hosting of an FISD event was a Women’s Group function where she introduced industry star Deb Walton, now chief revenue officer for Refinitiv. “It was a bit nerve-racking but being among a group of women I felt more comfortable, and that helped me later with the regular member programs for the larger FISD community.”

The bottom line is that there is room for all types of programs in our organizational repertoire. A woman member who attends next Tuesday’s event may be more likely and comfortable to attend other FISD events, in addition to engaging in their certification program and working groups.

Tuesday’s talk is also being promoted as a “relaxed discussion” and will allow plenty of time for questions. That’s an important quality of these meetings as well, especially now. “You’re looking at a screen with everybody’s face staring back at you. It can be even more intimidating,” Tannen has said.