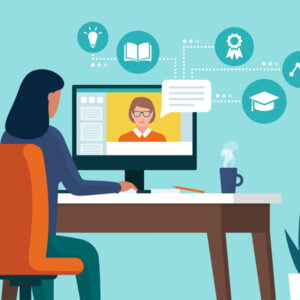 During an October 2019 SIPA webinar on managing remote workers, Heather Farley, COO of Access Intelligence, said that the most relevant stat was that 90% of remote workers said they’re more productive. “We hear this a lot at AI,” she said. At that time, many of us might have raised our eyebrows. Now, we’re all (tired) believers. But is it sustainable?

“Many also advocate for experimenting with small adjustments to your routines to hit your most productive period in the day,” Diana Shi wrote in a Fast Company article titled 9 CEOs Share Their Best Tips for Successful Remote Work

That sentence struck a chord for me. At around 7 am this morning, I read work emails written around 10 pm last night. And I’m sure that colleagues look at my 7:05 am emails the same way I look at their late-night emails—when I’m either asleep or on the verge—and we make similar exclamations. We all have different times and vibes to get our best work done, and working remotely encourages that.

Looking back now, it was prescient of SIPA to conduct that October 2019 webinar with Farley and Dan Fink, managing director of Money-Media. They gave an excellent blueprint of what to do and not do managing remote workers. Let’s mix some of their advice with some from the CEOs that Shi featured in her article for an updated guide.

Invest in relationships. “Find creative ways to still informally connect with your teams, to build and strengthen relationships,’ said Niren Chaudhary, CEO of Panera Bread. He also advises to share praise. “Remember to recognize and show appreciation of your team.”

Engaging in meetings is very important. In October 2019, Fink was concerned that remote workers would receive audio and video feeds from conference room meetings. “We’ve installed some large screens in conference rooms. There’s a marked difference in how that person participates. And how the people feel; it feels like that person was in the meeting room. It really does make a significant difference.” Today, engagement in meetings remains important. I’ve read that we lose a lot by multitasking during meetings. A recent study found that “those who focused on nonverbal communication cues from their colleagues or said they tried harder to listen attentively were less likely to see any change in the quality of their work relationships.”

Make time for one-on-one voice calls, without video. “There’s a lot of video fatigue, so be conscious whether all parties want to use it,” says Anne Chow, CEO of AT&T Business. “With family, do take advantage of all the benefits of video, especially with those whom you haven’t seen for a while. If they don’t know how to, get them set up.”

Ask for feedback. I think this one still applies. “Is this working for you?” Farley asked. “What are the pain points? Are you lonely? Do you feel disenfranchised? Is the work getting done? Relationships work because they’re built on trust. We talk about it on a regular basis, to have regular touch-in points is critical. Things don’t just happen. Clear the decks and course correct to get those situations working.” She also said to “over-communicate.” Jeff Maggioncalda, CEO of Coursera, agreed and said that’s also incumbent on the manager. “Communicate. Schedule time for more all-hands, team stand-ups, one-on-ones, and skip-levels.”

Check on their technology. Pre-pandemic, 77% of remote workers were between ages 25-44. But now it’s everyone. Money-Media was quick to order “kits for a number of staff who were having difficulty being efficient in their home work space; things like a mouse, keyboard, monitor, office chair, etc.,” Fink said. “Most of these items are pretty inexpensive on amazon.com but go a long way to helping staff be productive and letting people know how much we appreciate their hard work during this crisis.”

Pretend you’re going to the office. “In this virtual world, maintaining some of the habits that helped me think and feel my best when I was going into the office has been really important to me,” said Joel Flory, CEO of VSCO, such as getting up early to exercise. Any guess what Jennifer Hyman, CEO of Rent the Runway—a subscription fashion service—recommends doing? Get dressed nice every day, of course. “Getting ready in the morning helps signal my body and brain that productivity is my priority.” I’ve read that some people even ride around for a half hour and then come home to give the commuting feel. I’ve kept my Friday tradition of driving to Heidelberg Bakery in the morning.