The tidal wave of data privacy regulation (CASL, GDPR, California Data Privacy and a slew of others) combined with major tech platforms like Apple and Google abandoning third-party cookies lead many to predict the decline of third-party data and power coming back to publishers who can use that first-party data to sell high-value audiences and scale their reach beyond their own websites and communities.

While Penske joins a list of heavy hitters such as The New York Times, The Washington Post, Forbes and Bloomberg in building out first-party data solutions, the opportunity is open to publishers of all sizes, provided they make the not-insurmountable investment in a tech stack that both organizes the data and makes it actionable.

“With the demise of the third-party cookie, resources are going to shrivel up and disappear,” says AnnMarie Wills, CEO and president at first-party data specialists Leverage Lab. “Organizations with deep, rich, organized and accessible first-party data will be in the catbird’s seat.”

Not Just Retargeting
Legal publisher ALM in 2019 introduced Audience First, an advertising platform that targets decision makers and influencers through first-party data and self-reported demographic data. They then use advanced ad technology to drive those messages to audience segments on both ALM channels and beyond, including social media and other websites.

ALM is quick to point out that this is different from retargeting. “Retargeting allows for an anonymous user to be followed based on cookies,’” says Matt Weiner, president of marketing services at ALM. “If I am identifying a specific individual and targeting that individual, you can see where the value starts to increase.”

How Aviation International News Scaled Its Reach 50X
Scale has always been a challenge for B2B media, which typically serves high value but niche audiences. Today’s digitally-focused marketers are demanding both scale and ROI without any wasted spending.

“First-party data is not new for B2B publishers,” says David Leach, COO of Aviation International News (AIN), which covers the aviation sector. “We’ve always tracked subscriptions and demographics with our print product. That is the same first-party data that we’re talking today but the tech stack and complexity have changed.”

With a traditional mix of print, websites and newsletters, AIN faces similar challenges to much of the B2B industry when it comes to serving digital marketers looking for reach and ROI.

“We could offer print but that includes many of the demographics they aren’t interested in specifically, and the ROI is difficult to show,” says Leach. “We could offer digital display or newsletter placement, and there is some demonstrable ROI but still a lot of unknown traffic. We could isolate our audience in CRM and target with direct email, but that could burn out our list. We could target content on our website but doing that at scale doesn’t work—it cuts our traffic and inventory too thin.”

Despite knowing more about its audience than ever before, AIN’s ability to productize this information at scale—the key part—was limited. 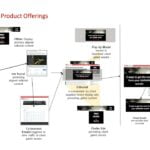 To jump that hurdle, AIN realized it needed to add a Customer Data Platform to the mix. Guided by Leverage Lab, AIN tapped Lytics as its CDP to an integrated tech stack that included HubSpot as digital CRM and Computer Fulfillment as print CRM.

“This brings together all our siloes of data,” says Leach. “Now what we can do is track that behavior pattern in our CRM—we have opens and clicks but also website behaviors like white paper downloads and webinar sign ups. It gives a much more robust look at our audience and brings all behaviors and activities into one profile.”

If AIN sold an advertiser on the magazines, it could target 5,600 names. With the addition of behavioral interest data, third-party lists and another 4,300 names from its other media brands, AIN can now offer a targeted audience on its own properties of more than 15,000.

AIN can then target its own readers and lookalike demographics with offsite display advertising on other websites and social media channels and drive those eyeballs back to its own brands. “We can increase our inventory by 50 times in terms of what we can offer a client,” says Leach.

Selling Audience, Not Product
AIN has shifted to selling audience, not just selling product. “That can be a hard thing for our sales staff to get their heads around but it’s incredibly powerful, especially with what marketers are asking for,” says Leach.  “This allows us to target audience at scale. In the old days, our ability to reach this audience on our own channels at scale would have been nearly impossible.”

Like ALM, Leach stresses that this approach is not retargeting or programmatic advertising.

“These are folks that we’ve identified with first-party data that we’ve collected forever—they’re a pilot for this company, flying out of this location, flying this type of aircraft and one day they might be interested in retrofitting that aircraft with a $500,000 avionics overhaul,” he adds.  “That’s who our advertisers want to reach. We’re just starting on this journey, but the results so far are very encouraging. Some of our clients are all about this while others are still doing all print. Either way, it’s still a great story to tell.”