“I never doubted that equal rights was the right direction. Most reforms, most problems are complicated. But to me there is nothing complicated about ordinary equality.”
—Alice Paul, suffragist leader 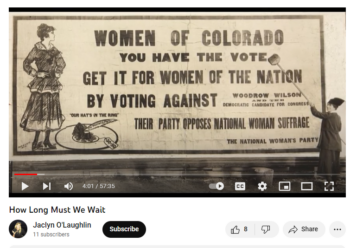 That quote begins a film by my friend Jaclyn O’Laughlin titled How Long Must We Wait. It’s a historical documentary about the 72-year battle that women fought to get the right to vote in the United States—and it’s especially resonant on this Election Day week. The hour-long film just won best documentary feature at the Arlington International Film Festival just outside Boston. You can watch it here.)

Jaclyn put together the film during the pandemic when she started working remotely, which she still does, now as a videographer for the ALS organization. She’s not alone, of course. As of late September, 21.6 million people in the United States worked remotely five days a week, while 32.3 million worked at the office at least one day.

In an article from the MIT Sloan School of Management titled 3 Reminders for Managers in a Hybrid Work Environment, Meredith Somers writes that “more than 80% of executives say they are worried about their remote employees’ ability to collaborate fully on team efforts and build relationships with their colleagues.”

While remote productivity has been hard to question, how we are collaborating can be. Somers offers three pieces of advice:

Encourage team autonomy but give new employees extra support. Don’t establish one overarching hybrid work rule for an entire organization. Most firms are made up of different groups with different functions that require different onsite and remote expectations, said Robert Pozen, author of Remote, Inc.

Set expectations for hybrid interactions and make them meaningful. While the actual work is important, it’s also important leaders encourage team bonding—such as facilitating a virtual group activity like wine tasting or playing a game—while ensuring each employee feels included.

Ensure all voices are heard. In every group or individual meeting, try to ensure someone is monitoring, listening, and intervening on behalf of the voices not being heard, said Thomas Kochan, an expert in employment policies and labor-management relations.

Here are three other tips for keeping remote employees engaged.

Create virtual “connection points” for employees. “Is there a platform in which employees are encouraged to chat with each other?” Danielle Abril of The Washington Post’s Help Desk asked. “Are there regular calls? Are there opportunities to team up with employees from different teams for something that might resemble a virtual water cooler?”

“We do a thing called ‘P-Can’ [phonetic]. We’re doing it every three months during the pandemic, and then we started doing it generally. It was six months. But it was asking people, what are your needs? What are your tech needs? What are your emotional needs?” A recent study by Deloitte found that one in three employees and executives are constantly struggling with fatigue and poor mental health, with an enormous dichotomy between perception and reality.

Are you taking into consideration… “Remote workers say they enjoy connecting with nature, exploring the world and spending more time with family, noting that their outlook on work has changed forever,” Danielle Abril wrote recently in the Post. “But it’s not rosy all the time: Some say their new lifestyles have introduced complications like time-zone coordination [especially when we change the clocks], a different approach to connecting with colleagues, slow internet connectivity, the fear of missing out in-person, and sorting out international health care and travel restrictions.”

One of our upcoming webinar speakers has a newborn baby at home. We are happy to work around her schedule.