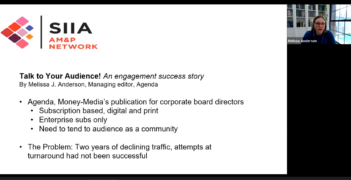 Let’s say you run an enterprise subscription-based publication for corporate board directors and have seen two years of declining traffic (2016-2017). You’re an accomplished journalist—like Melissa Anderson, managing editor of Money-Media’s Agenda—so you think sensibly. “Maybe if we position ourselves as covering the news of the day, as it pertains to corporate boards or a corporate governance angle. Yes, that’s what we need to do.” She paused. “But it really wasn’t working.”

Anderson recounted this in her excellent, there’s-a-moral-to-this-story section of a recent webinar hosted by our AM&P Network—titled The New Content Metrics: How Publishers Are Measuring Engagement and Using That to Grow.

In September 2018, Money-Media managing director Dan Fink launched a growth plan with several prongs for all divisions, including marketing, sales, operations and tech. “But I can only speak to the editorial ones that I was involved with,” Anderson said, “which were to perform a traffic and audience engagement analysis. And what we found doing these things was that we were on the wrong path—which is why I titled this presentation, Talk to Your Audience.”

Because Agenda, which also prints and mails twice weekly, only sells enterprise subscriptions, you’re not going to read it through search engines or on social media. It has to come to your inbox or mailbox. “That drives the need for us to tend to our audience really carefully, as a community almost,” Anderson said. “Because the same 12-15 people on each license who are reading Agenda are the ones who are going to vote up and down each year if they want to renew the subscription.”

The first problem she found was a biggie. “If we had a company’s name in the headline for a story, people didn’t read it. They weren’t as interested if they knew who the story was about which suggested that we were we were on the wrong path [with] that kind of this news-of-the-day sort of approach.”

(Interestingly, the next speaker, Davide Savenije, editor in chief at Industry Dive, said that seeing company names brings a completely opposite response for their audience. But that only underlined the moral here, that talking to your audience—not reading what specifically worked for Money-Media—is the elixir of choice. I’ll be reporting soon on Savenije’s also-superb presentation.)

“But that didn’t tell us the whole story,” Anderson continued. “So beginning in January 2019, we launched this audience engagement analysis. We basically emailed a bunch of prospective readers as well as a large chunk of our readership. I ended up doing extensive one-on-one conversations with more than 40 corporate board directors and about a dozen other executives who were in our audience, like corporate secretaries, chief legal officers, people like that who could be reading Agenda, even if they weren’t a director. These conversations took about an hour each. They were very lengthy and detailed, and people were really excited to share what they liked about publication, what they thought we could do better and how they use it. It was a really great exercise, and the insights were just phenomenal. We built them into how we cover corporate boards, our news for our readers and build out our audience. And it’s really been successful.”

That assessment speaks highly of Fink for giving the time for that process to play out, and, of course, to Anderson, for engaging and listening—such a time-honored but often under-appreciated skill—and not rushing through that.

“What we found was that our audience reads Agenda for the analysis,” Anderson said. “They print out—I heard over and over again—‘I love to print out your issue and take it into the boardroom.’ They mark it up, they talk about what they want to do and don’t want to do—things they think are good ideas or bad ideas about how they want to run their own companies. So that’s what we found.”

“In 2018 we began implementing what we found from the traffic analysis, and we saw a 15% lift in traffic in that first year and then we continued to see traffic increase over the next three years by positioning ourselves as a resource for our audience,” Anderson said.

That included a pandemic-related, pop-up newsletter that ran for about nine weeks around the beginning of the crisis last year. “We had extremely high engagement from that,” Anderson said, “contributing to the new sales, and it also led to something really interesting and I was excited to see: a double, year-over-year rate for forwards and sales for a newsletter.

“Our readers really aren’t on social media; they’re not sharing these things with their network that way. But they largely are forwarding them and that rate had been pretty stable for the past few years, and this year it skyrocketed… which shows us that people are really finding a lot of value in the content that we’re producing about how to solve problems and how they can take these into their communities. That was really exciting for us.”

What’s next on the agenda for Agenda? “We’ve been piloting an influencer program where we’ve heard again and again from people in the consulting space that they wish they could get our publication, but since they’re not a corporate board they can’t,” Anderson said. “We’ve experimented with providing a few comp accounts to those people [who] we want to be sharing our stories with their clients, and that’s been really successful. We have seen those come up through influential people who want to be sharing our pub.

The most exciting thing, she added, was that the tech team at Money-Media has been hard at work on building an entire new “stats platform that’s going to include metrics like scroll depth and time on page to produce this view into how in-depth our readers are looking at our stories, which again is another view on that value beyond just click-throughs.”

We’ll definitely stay tuned for that.