With the Juneteenth federal holiday yesterday, many media brands acknowledged the occasion with new written and video content and statements. Twitter even added a new Hashtag emoji that they displayed on any Juneteenth related tag this year. Tony Silber takes a look at a couple of these new initiatives and the trends they might create.

I’ve written two items in a week about major media companies that rolled out initiatives related to the commemoration of Juneteenth, which was officially celebrated yesterday. 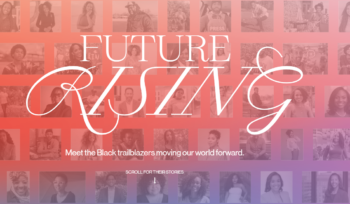 First, Hearst Magazines and Oprah Daily announced last Monday that it’s launching the latest iteration of its sponsored “Project Tell Me” series, called Future Rising, timed to coincide with Juneteenth. It is part of a storytelling initiative celebrating the impact of Black culture on American life.

The series began just over a week ago and includes interviews with “Abbott Elementary” star Sheryl Lee Ralph; Jessica Watkins, the first Black woman to live at the International Space Station; Mickey Guyton, who went down in history as the first Black woman to earn a Grammy nomination in a country category; and architect Nina Cooke John, whose new endeavor is the Harriet Tubman Monument in Newark, set to open to the public this summer.

“Big storytelling efforts around underrepresented communities can often center on activists and politics, which is important for telling the story of social change, but is only one slice of experiences, accomplishments and people,” Alison Overholt, Oprah Daily general manager, told MediaVillage. “What I love about Future Rising is that it involves 34 pieces across a dozen brands that span every genre imaginable.”

And Friday I posted a story about Dotdash Meredith’s Parents brand launching Kindred, a digital destination and community created for the parents and caregivers who are raising the next generation of Black children.

Both brand extensions are well timed and, most likely, harbingers of more niched content to come. The Hearst and Dotdash Meredith launches deal with contemporary issues and concerns relevant to their audiences. That’s completely appropriate. But in marking this day, it’s always good to reflect on how we as a country got to where we are. In particular, “Kindred” makes a point of referring to “free” Black children, which means for parents to reject all the many assumptions, impediments and biases that Black kids especially face as they grow up.

“Culturally, we parent differently, and we do family differently,” Kindred editorial director Kelly Glass said. “There’s so much nuance in the Black family experience that parenting publications don’t capture. Kindred is filling that gap. We’re also inviting the entire village of people into the fold because we know firsthand how important the aunties, the grandparents, and those key figures in Black families are to the lives of Black children.

“All of us who take seriously the responsibility to raise Black children with a radical sense of freedom and joy are going to find community here in the news, stories, and experiences we share on Kindred.”

I could go on literally for hundreds of pages about the contributions of Black Americans to our country and culture, many of whose stories are never told. But for now, I’ll salute Hearst and Dotdash Meredith and all the other media brands making the effort to celebrate Juneteenth and publish new content in that realm.