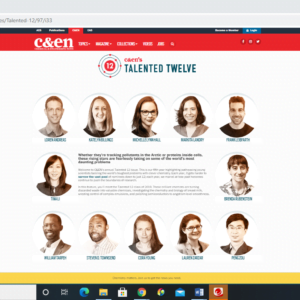 “One of my favorite events is on the day we have our symposium—hearing the TED-style talks of the Talented 12,” Bibiana Campos Seijo, VP of C&EN Media Group and editor in chief, C&EN, American Chemical Society, told me this morning, recounting their 2019 fall meeting and the program that celebrates young chemists throughout the world. (Pictured is that group from 2019.)

“I got to the room and was talking to Paula Hammond”—head of MIT’s Chemical Engineering Department, a member of the C&EN advisory board and was guest editor for C&EN’s special Trailblazers issue last month—“and in walks Frances Arnold, the 2018 Nobel Prize winner in chemistry and only the fifth female ever so honored.

“‘I know you didn’t invite me, but I’m here,’ she said,” Campos Seijo continued, recalling her delight. “I think she stayed for two of the four hours. Someone asked her later, ‘Did you enjoy it?’ She said yes, and that she’s part of a foundation that gives awards and put forward one of the names of the Talented 12—and that person eventually won! So she was sourcing us.”

The excitement in Campos Seijo’s voice is palpable—even virtually, more than 1,000 people watched those talks last year. When done right, member recognition programs such as the Talented 12—and two others I expand upon here, Putman Media’s Influential Women in Manufacturing and ASCD’s Emerging Leaders—can be huge win-wins for organizations. And as C&EN demonstrates, the publications departments can either run the whole program or at the least play a vital role.

But the “done right” makes all the difference. What these three organizations do so wonderfully—exemplified by that in-person (remember that?) anecdote from 2019—is that these programs do not just move on to next year once the people are selected and recognized. They are integrated into publication roles, TED-style talks, podcasts, webinars, advocate and leadership programs, and other organization-sponsored activities. Given that the people selected are a diverse group in all facets, they will also provide new voices and viewpoints to those activities.

The Talented 12 “identifies and celebrates young chemists working in academia, industry, and government, who are just beginning to put their innovative and transformative ideas into practice.” Campos Seijo believes it is important that the 12 represent those three areas, and are diverse globally as well as the more obvious ways. Each selectee gets an excellent profile written about them by the C&EN staff. Here’s an example:

“Mireille Kamariza wants to make a difference in neglected diseases around the world. As a first step, she developed a quick and cheap test for tuberculosis (TB) while still in graduate school. Kamariza was 17 when she moved to the U.S. from Burundi in search of the American dream. But even then, she says, ‘I don’t think that I had quite an understanding of where my career would take me.’” 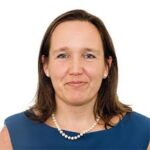 And while nominees—there were more than 500 last year, including some sent in by other Nobel Prize winners—do not have to pay to enter, revenue comes in through an established sponsorship with Thermo Fisher Scientific. “They’re one of the largest instrumentation companies in the world, so they really like the idea of reaching younger members globally,” Campos Seijo (pictured here) said. “They love [the program]; they don’t interfere at all.”

The people selected also love the program. “There was one winner from a few years ago,” Campos Seijo said, “who told us that before winning, ‘nobody knew me last week. Now I’m sitting at my lab getting all these applications to join the lab.’”

And as mentioned above, the relationships continue. There are collaborations between the Talented 12 winners, sometimes even ones from different years. Winners are invited to give talks, be emcees at events, and serve as associate editors for some of the ACS journals.  “I’m obviously very proud of what we have achieved here not only because it recognizes young, global talent in the chemical sciences but it also attracts [that] considerable sponsorship package,” Campos Seijo said. 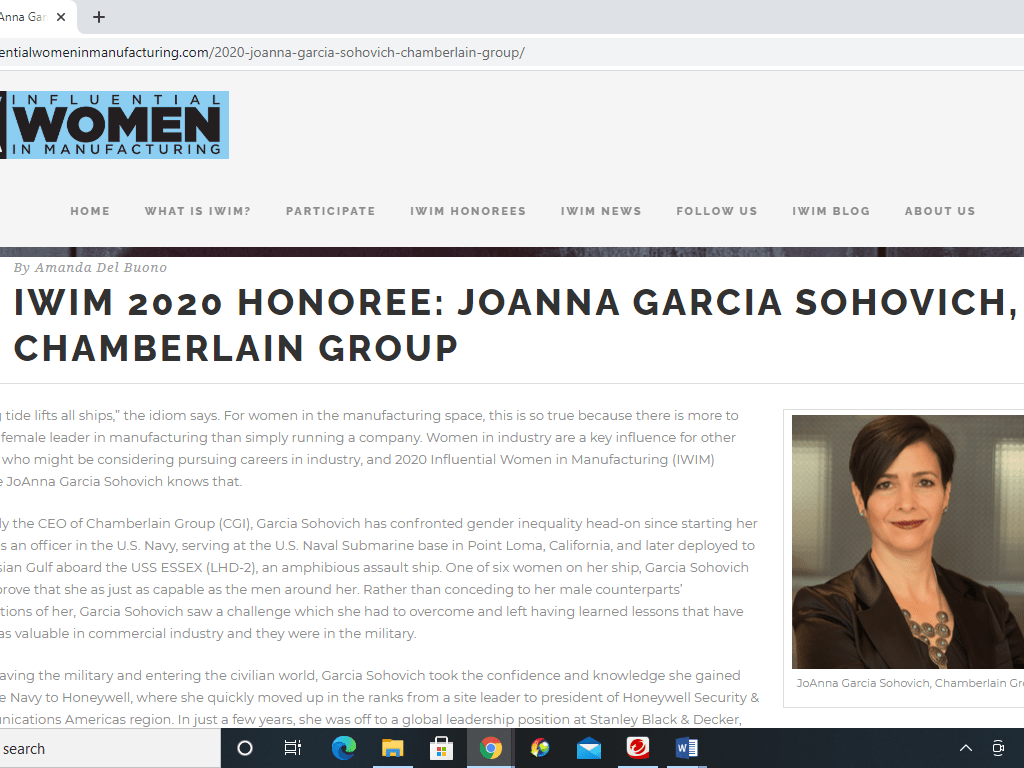 “Don’t be afraid to ask for the roles you want. Be prepared, though, to co-invest in your future by accepting the positions that will get you there. That may mean embracing risk by taking tough positions—the ones your peers are afraid to accept or the ones that move your family across the world. In other words: the roles you never imagined taking!”
—Joanna Garcia Sohovich, Chamberlain Group

That snippet comes from an eBook put together by the amazing Erin Hallstrom, digital and content strategy director for Putman Media, to celebrate the 20 2020 honorees in their Influential Women in Manufacturing (IWIM), an innovative program that honors women who are effecting change in manufacturing and industrial production.

Now in its fourth year, IWIM succeeds in many ways—celebrating key Putman customers, amplifying the voices of women in a field where they have been under-represented, creating a new speaker pool for podcasts and webinars, and offering advice to the next generation (which the eBook focuses on).

Hallstrom asks each of the honorees this: What advice would you give to women entering the field of manufacturing?

“Never stop learning,” advised Cindy Jaudon, regional president, Americas, IFS. “Even after being in the industry for over 25 years, I’m still learning new things. Manufacturing is an ever-changing industry full of complex processes and procedures that will challenge you to leave your comfort zone. This is where a strong network of diverse thinkers will prove invaluable.”

“I feel small when I look at all [these women have] been doing and all they do for their companies,” Hallstrom said. “You can see how excited their companies are. I just get excited that someone enjoys it.”

She also runs the judging, which had to go through almost 100 nominations last year. In the past, they’ve received a formal proclamation from the governor of Illinois, and Sen. Tammy Duckworth (D-Ill.) wrote a commendation. “…we just wanted to honor women making a name for themselves,” Hallstrom has humbly said.

It’s also important to get support from the top. “I am proud that Putman could play a role in shining a light on the extraordinary work being done by so many women in the manufacturing field,” Putman Media CEO John Cappelletti has said about IWIM. “Our hope is that their achievements will inspire other young women to join this dynamic industry and be a part of creating manufacturing’s exciting future.”

The program has changed lives. “Not only the honorees, but our own,” Hallstrom wrote in a past year’s blog. “We saw the profound effects of amplifying women’s voices and connecting an alliance of women who were impacting the world in their manufacturing careers… IWIM was born out of a need to amplify and connect, and I’d like to continue that pursuit.”

She has. When we talk about member or customer engagement, what can be better than recognizing—and energizing—an entire faction of your audience that has mostly gone unnoticed? If a publisher or media company can hear from women like Garcia Sohovich and Jaudon, then beneficial outcomes will take place. 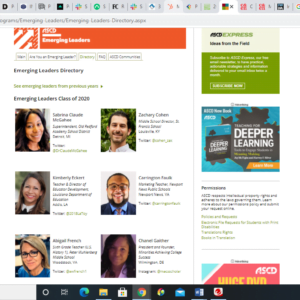 Often, good photography and design can make a page and program shine. ACSD’s 2020 Emerging Leaders Directory looks like it came straight out of central casting. But then you read who these esteemed people are and learn that they are so much more than pretty faces. Here are a few:

“Elevating educational leadership is the heart of what we do at ASCD, and our emerging leaders exemplify leadership at its best,” ASCD CEO and Executive Director Ranjit Sidhu said in a September 2020 press release. “These educators strengthen our community and our organization. We are excited to welcome our new class and look forward to working together in the years to come.”

Again, that last phrase stands out—this is a partnership that will continue. The ASCD Emerging Leaders program features educators who have been in their field for 5-15 years and who have made an impact as leaders in their schools, districts and communities.

They are enrolled in the program for two years and invited to participate in multiple opportunities, including, when circumstances allow, attending the invitation-only Leader to Leader convening, writing for ASCD publications, and hosting the ASCD podcast. There are also avenues for leadership opportunoities in the association. ASCD adds that “alumni from the program have become ASCD authors, faculty members and board members.”