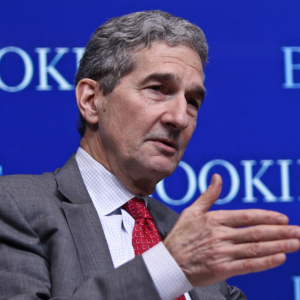 Cameron Kerry is a global thought leader on privacy, artificial intelligence, and cross-border challenges in information technology. He joined Governance Studies and the Center for Technology Innovation at Brookings in December 2013 as the first Ann R. and Andrew H. Tisch Distinguished Visiting Fellow. Previously, Kerry served as general counsel and acting secretary of the U.S. Department of Commerce, where he was a leader on a wide of range of issues including technology, trade, and economic growth and security. He continues to speak and write on these issues, focusing primarily on privacy, artificial intelligence, and international data flows, along with other digital economy issues. During his time as acting secretary, Kerry served as chief executive of this Cabinet agency and its 43,000 employees around the world as well as an adviser to then President Barack Obama. His tenure marked the first time in U.S. history two siblings have served in the president’s Cabinet at the same time.

As general counsel, he was the principal legal adviser to the several Secretaries of Commerce and Commerce agency heads. Kerry spearheaded development of the White House blueprint on consumer privacy, Consumer Data Privacy in a Networked World: A Framework for Protecting Privacy and Promoting Innovation in the Global Digital Economy. He then led the administration’s implementation of the blueprint, drafting privacy legislation and engaging with international partners, including the European Union. He also was a leader in the Obama administration’s successful effort to pass the America Invents Act, the most significant overhaul of the patent system in more than 150 years. He helped establish and lead the Commerce Department’s Internet Policy Task Force, and was the department’s voice on cybersecurity issues and similar issues in the White House “Deputies Committee.” Kerry also played a significant role on intellectual property policy and litigation, cybersecurity, international bribery, trade relations and rule of law development in China, the Gulf Oil spill litigation, and other challenges facing a large, diverse federal agency. He traveled to the People’s Republic of China on numerous occasions to co-lead the Transparency Dialogue with China as well as the U.S.-China Legal Exchange and exchanges on anti-corruption.

In addition to his Brookings affiliation, Kerry is a visiting scholar at the MIT Media Lab. He also served as senior counsel at Sidley Austin LLP in Boston, Massachusetts and Washington, D.C., where his practice involved privacy, security, and international trade issues. Before Kerry’s appointment to the Obama administration in 2009, he practiced law at the Mintz Levin firm in Boston and Washington and taught telecommunications law as an adjunct professor at Suffolk University Law School. Kerry has also been actively engaged in politics and community service throughout his adult life. During the 2004 presidential campaign, he was a close adviser and national surrogate for Democratic nominee John Kerry, traveling to 29 States and even Israel. He has served on the boards of nonprofits, and is currently on the board of the National Archives Foundation and an advisory board for Microsoft Corporation.

The Ann R. and Andrew H. Tisch Distinguished Visiting Fellows in Governance Studies are individuals of particularly noteworthy distinction. The fellowship is designed to bring distinguished visitors from government, business, journalism, and academia to Brookings to write about challenges facing the country. Kerry is the first to be named to this prestigious fellowship.