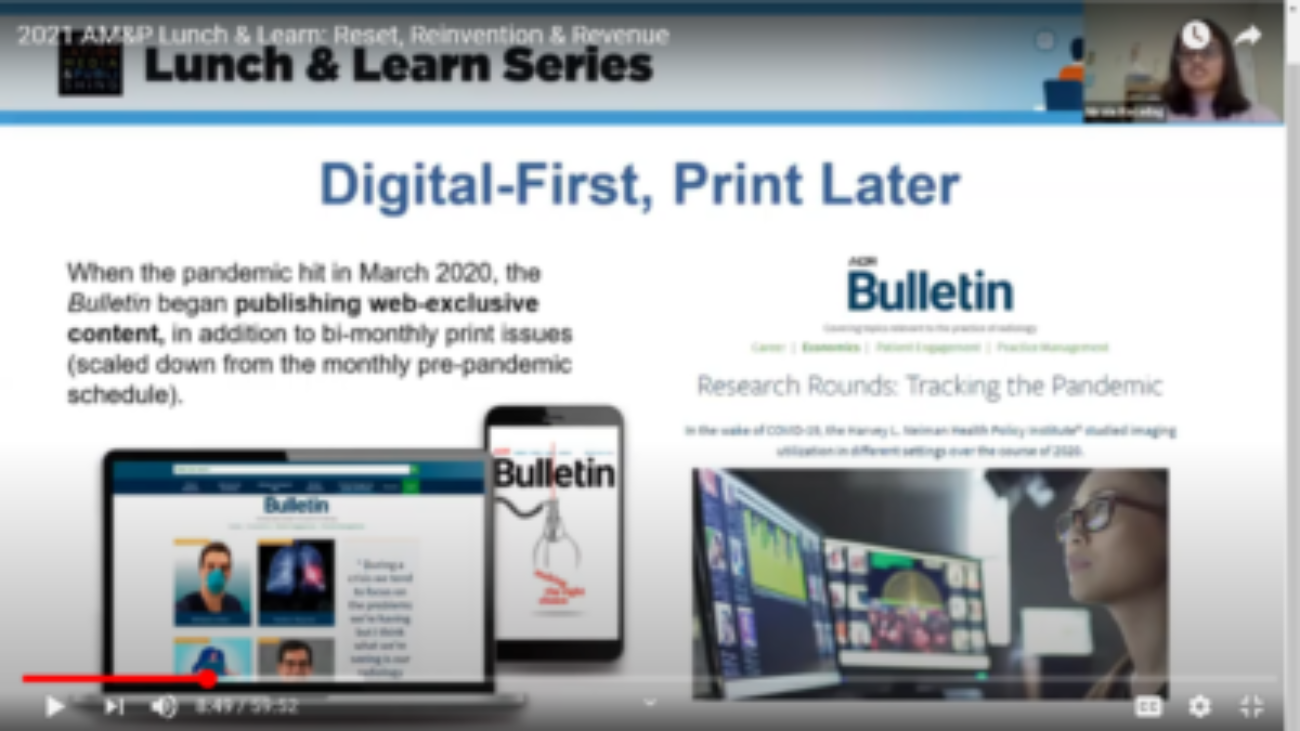 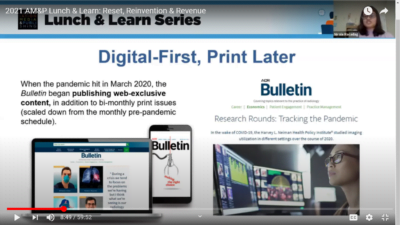 Towards the end of a takeaway-packed AM&P Lunch & Learn 2021 kickoff on Wednesday—titled What Lies Ahead for Saving Print, Going Digital, or a Combination of Both—Nicole Racadag, managing editor at the American College of Radiology, spoke about the fluidity of the last 12 months.

“I’ll just say really quickly, I know a lot of people on the chat were asking how our readers felt about going digital and then going back to print,” she said, referring to their initial pandemic decision to cut back to printing just six issues before recently going back up to 12. “And that’s actually something we’re going to be asking in a reader survey that we’re doing later this year. We wanted to do a full cycle of this digital-first, and we’re coming up on that next month. So… hopefully we’ll get some good insight from that—…some good aggregate information about whether this is working or not.”

Marlene Hendrickson of the American Staffing Association and Mike Winkleman of Leverage Media deserve kudos for putting this session together because it really targeted what’s important right now: What best serves member needs? Yes, print is still highly valued by members, but can they benefit even more with a full digital experience? Can we give them more ways to engage with our content? Until we try new things and then ask, we don’t really know.

What Racadag and ACR found out by being forced to go digital is that more can be better, when it comes to serving members.

“Our audience being radiologists, they are on screens all day reviewing cases and images, so they do like having their tangible print copy,” she said. But ACR also found that once they communicated with members about the added value, digital caught on. “We had to make sure that they were aware that their print issues were being reduced, but at the same time, they weren’t really losing anything from their membership. Instead this whole digital publishing model was going to be a value-add for them. They were going to get more content more frequently.

“We worked with the marketing team to make sure our table of contents was being sent to all members so that way they knew they could access the content online, even though the main June issues, for example, were not going to be printed. Our early web statistics show that users were going to acr.org/bulletin to browse content. And [by tagging COVID-19 content], we found that that tag was getting a lot of hits, as well as tags like diversity and inclusion and health equity.”

This led to a social media awakening for ACR. They “ramped up” their social media strategy, and an “amazing” art director made sure that it all would look like one cohesive package. They created graphics, quoting from various articles as a way of driving content to their website. “We really discovered the power of social media by doing this,” Racadag (pictured here) said.

From there, a podcast followed. “This was something totally new for our organization, and we decided we were going to try it out with our member magazine,” Racadag said. “We launched the first season of the ACR Bulletin podcast in the summer of 2020. The first installation was on population health management, which had a lot of implications for our members, especially with the pandemic. We have actually released since then another series, the November on lung screening to coincide with one screening awareness month.

On the decision to return to printing 12 issues a year, Racadag said: “We took stock of where we were and solicited a lot of member feedback. Our members really missed getting their print issue each month, even though they were very excited with our digital offerings.”

A downloadable PDF. “This is basically an exact replica of the print edition; it’s easy to export and easily read on desktops. It saves money by eliminating the print and mailing costs.”

The flipbook magazine. “This option is a lot more flexible in the way you can customize and deliver it to your readers, and you still maintain that page-turning feel. It doesn’t need to be downloaded to be viewed because it works directly with your browser—you can embed the file on your website or share it on social media, so you can really increase your outreach. And you can embed videos and interactive links and also collect statistical data and analytics.

The HTML-based magazine. “These are digital magazines that use the same technology that websites depend on with HTML javascript. And this format is obviously multimedia-rich and interactive for the readers. They’re designed to work with any browser so it’s appropriate for desktops and mobile devices. They are very reader friendly because, unlike the fixed layouts of your pdfs or your flip books, HTML magazines will adapt their layouts and type size to the screen size, and your magazine can be hosted anywhere you choose.”

Sifford said that there will be a lot of considerations to what design elements you’re going to want to bring in from your print magazine into the HTML format. She spoke about the process she has been going through with one association publication. “For budgetary reasons they needed to transition get rid of their print magazine and into a digital format.” They began with the flip book format but then, along with overhauling their website, they went with the HTML format.

“Since this was a major change for them, it was really important to keep as many elements from the original magazine,” Sifford said. The main element that they kept exactly the same was the cover, which they still created as if it was print. “From issue to issue, this is kind of their go-to button for what brings a little familiarity of the print magazine to their readers and shows them that they’re entering the magazine.” They also worked with the Web design team to recreate department heads, so it looked close to print version of the magazine. It became very reader friendly.

“So basically we’re still in its infancy. We’re working on the fourth edition of this magazine format and, honestly from a design perspective, it’s gone relatively smooth. There has been a lot of great feedback from their readers… The bonus is having that feedback and the analytics and really seeing what people are gravitating towards—so you’re finding out what’s working and what’s not.”

Last but certainly not least came Emily Fullerton of Sheridan and the CJK Group. “As printers we have a bird’s eye view of what’s going on in association publishing,” she said. “What we saw at the beginning of the pandemic is quite a bit different than what we’re seeing now. [At the beginning,] many associations decided to do things to save money, like skipping issues, reduce page counts, do a combined issue or lower their paper costs. We did a lot of spreadsheets for customers that showed them different ways to save money, like reducing their trim size or downgrading paper.”

Now, she said, most customers are back up and running at close to the same page counts as before—with one caveat. They liked the saving money part. “A lot of them have decided to take some savings that they saw in some ways, where they either reduce their paper or found other ways to save money on production costs and kept those even though they’ve returned back up to their regular frequencies and their higher pitch counts,” Fullerton said.

The city, regional and special interest magazines have had an especially hard time, she said, because they rely much more heavily on ad dollars without membership revenue coming in. Plus paper costs went up 35% last year, mills closed down, and most shippers, because of the increase in volume and staffing issues from the pandemic, are no longer guaranteeing delivery. So publishers, are trying to save money anywhere they can.”

Then mailing, of course, has not been the same. A typical delay can now turn an issue that normally mails in seven days to 21 days or a month… We’re having so many customers complaining that their issues are taking a really long time to mail and the demands for freight are just higher than ever.”

But Sheridan has been aggressive, pursuing a diversity of products—books, catalogues—and printing journals for the scholarly, medical and technical communities. “We have a lot more services than we’ve ever had before for magazines.

They’ve had a lot of customers that switched to digital for at least six issues a year, she said. But then have also seen many of those switch back to their full version of printing. “And then the other thing that we had a huge increase on was print on demand,” Fullerton said. “We have a whole plant in Pennsylvania that does a ton of print on demand.”

Fullerton finished by saying that “many customers have decided to return to print. If they have dropped off or if they have reduced their page counts, they seem to be either on their way back up to where they were or they’re already backed up and increased.”