“There’s a phrase for the uneasiness many of us feel when confronted with humanlike machines—the Uncanny Valley. Coined in the 1970s by Tokyo robotics professor Masahiro Mori, the phrase describes how as machines appear more humanlike, they become more appealing to humans—but only up to a point. After that, as they appear more humanlike but not quite, they inspire revulsion in the observer. ¶ In the accounting profession, there is a similar uneasiness when dealing with the idea of AI, though it has nothing to do with how the software looks…”

Thus begins Ranica Arrowsmith’s 2022 Neal Award-winning, exceptional story for Best Single Article, titled AI, Applied: Opening the Black Box in Arizent’s Accounting Today. She goes on to provide ways that AI can assist people in accounts receivable, accounts payable, audits and other transactions. And that lo and behold, AI is not that scary and not after people’s jobs.

The other winners in this category, based on company revenues, were:

Alexia Smokler of REALTOR Magazine for her story, Repairers of the Breach—which looked at “America’s history of racist housing policies and how realtors “are playing a vital role in community efforts to acknowledge and repair the harm.”

Holly Barker of Bloomberg Law for her hard-hitting article titled ‘A Preventable Mess’: How Dementia Takes Toll on Aging Lawyers.

Let’s look at some of the right stuff that these three women did so well in crafting these award-winning stories.

Diversify your sources. A key source for Arrowsmith (pictured) is Samantha Bowling, who lists herself on LinkedIn as an: “AI Innovator, Mentor, Business Owner, Auditing Standards Board Member, Speaker and I LOVE what I do.” She also quotes the co-founders of an AI-driven accounts receivable platform, and Youngseung Kuk who manages business outsourcing services for Top 100 Firm Armanino in Boise, Idaho.

Smokler interviews Shakeima Chatman, broker-associate with Carolina Elite Real Estate and owner of the Chatman Realty Group in Charleston, S.C. She has worked with buyers and sellers to confront heirs’ property problems. In the first part of her story, Barker interviews someone who counsels clients on legal ethics, a forensic psychologist, the executive director of the Illinois Lawyers’ Assistance Program, and the chair of the American Bar Association’s Commission on Lawyer Assistance Programs.

Tell stories. I wrote about the importance of this yesterday. Barker has an engaging style of starting each section with a person: “Frederick Emery Jr., an Assistant U.S. Attorney in Maine, was within a year of retirement when his colleagues started to notice something wrong.” “Robert Fritzshall had to be pushing 80, Bethany McLean thought, so she was a little surprised to hear him talk about expanding his law practice.” It quickly grabs us. Smokler tells the story of Evanston, Ill., which in 2019 became the first city in the U.S. to commit public funds to reparations for Black citizens. “It’s not by accident that Martin Luther King Jr. came here three times to address housing issues,” says Morris ‘Dino’ Robinson, founder of the Shorefront Legacy Center, which documents the African American experience in Chicago’s North Shore suburbs. 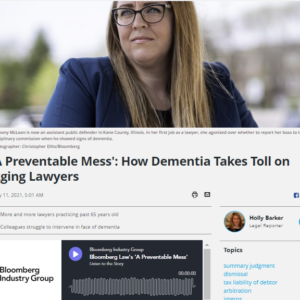 Use charts and photos. Barker’s story begins with a large, penetrating photo of McLean, who is now an assistant public defender in Kane County, Ill. Charts that follow include the ages of American lawyers and the prevalence of Alzheimer’s by age. The REALTOR Magazine story starts with a chart of the 17 states that have adopted a law to address heirs’ property problems. Then there’s a black and white photo of a 1964 civil rights march in Evanston.

Add audio to your story and a podcast around it. Barker also reads her article, giving Bloomberg Law’s audience another way to interact with them. In addition, they started a new podcast titled On the Merits with David Schultz talking with Barker about the story. Recent subjects for the podcast include gun violence, the gender gap in law firms, and Tesla’s legal problems. Most of the episodes are around 10-14 minutes, though the one on the gender gap is a “special episode” and 30 minutes long. Schultz shared hosting duties for that episode with a younger colleague Ayanna Alexander. She was great, and I expect we’ll hear more from her.

Add the author’s bio and picture. I like what REALTOR Magazine does at the end of its story, running a nice bio and photo of Smokler—she’s actually NAR’s senior policy representative for fair housing. Amazing that she won a Neal Award for the article and is not even a main content person—quite impressive! They also start the article with “Key Takeaways”; it’s an effective way of getting readers the gist of the story early.

Congratulations to these three deserving winners! Arrowsmith has since moved on to a short stint as a technical writer for the National Football League and now the lead external relations manager for the American Institute of CPAs. I hope she’s still writing!