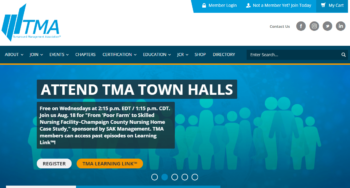 “People understood for the first time the value proposition that they could avail themselves to—the programming all throughout our system; any chapter was now available to them,” Scott Stuart, CEO of the Turnaround Management Association, told us recently. “The virtual environment elevated that.”

It was March 2020, Stuart recalled, and they quickly assessed the situation. “We knew we needed to take risks, to be bold and be early—if we were going to create a new model. Why? We determined this wasn’t going to be a two-week event. It [was going to make] an entire year of programming not relevant.”

In the past, chapters have been formulated by region, of course. Makes sense. But in our new virtual world—which, even with the much-anticipated return to in-person events, will not be going away—topic chapters make equal sense, where people congregate around issues that matter to them, no matter what region they live in.

“We had to reimagine what member value was,” Stuart said. “So we created new programs. The Chicago Chapter was doing Power Hours with Toronto. The UK Chapter was meeting with San Francisco. There were bourbon and wine tastings, Bingo and poker tournaments. We didn’t just survive; we elevated our profile and became leaders in our space.”

In addition, there are now virtual TMA Town Halls that are sponsored. The last one took place Wednesday and was titled, “From ‘Poor Farm’ to Skilled Nursing Facility—Champaign County Nursing Home Case Study, sponsored by SAK Management Services, LLC.” A previous one focused on The Trailblazing Women of TMA.

For associations, “topic chapters” could be a way to get more engagement from their audience. Pointing to another example—the Regulatory Affairs Professionals Society (RAPS)—Associations Now recently offered more potential benefits in this approach:

Increase attendance. Pre-pandemic, RAPS chapter events had been drawing around 50 attendees to in-person events. “Now all of a sudden, we were having 800 people come to these, because the regional limitations had been yanked off,” said Wesley Carr, director of stakeholder engagement. (Great title!) “RAPS is trying to figure out how to leverage these events, at which volunteers speak, in a hybrid context after a return to the ‘new normal.’” One question he brought up: Should chapters move from regions to topics?

Provide more community. Maybe you couldn’t have a Topeka or Helena or Mobile chapter because the audience is too small. But topic-based groups meeting virtually present a new type of community. “Now, [people from smaller areas] could do programs that are accessible by everybody, or they could participate in the programs that are being offered by headquarters as well as other chapters,” Carr said. For instance, on Aug. 25 the San Francisco Bay Area RAPS Chapter is holding this virtual event: LinkedIn Is the New Resume and Job Search Strategies for Regulatory Affairs Professionals. Open to all.

Start new conversations. “RAPS is testing a member engagement strategy called Conversations That Matter. It’s a series of 30- to 40-minute Zoom conversations about a hot-button topic led by volunteer facilitators. It’s less formal than a virtual event where presentations are the norm—and it’s more engaging, a direct response to requests from RAPS chapters. The goal is to encourage members to continue the conversation in other ways. ‘But we want to start off with that human interaction,’ Carr said.”

Take more confidence back to in-person events. “We made a number of changes to our conferences,” TMA’s Stuart said. “We were very hit or miss about a bunch of them in the first opportunity back in the fall. We took the learnings from that and in that second conference opportunity we equaled our sponsorship dollars we would have had in an in-person environment. Now we go back in-person [knowing] we were so powerful in what we deployed.” Stuart said groups started approaching TMA in April asking to buy sponsorships for events in 2022. “We made value urgent in the virtual environment. We showed that in our pivot that with our global membership there was probably more value in virtual.”