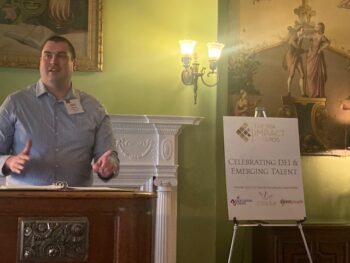 “We tend to average like 400-500 downloads and have had many that have hit a thousand within six months, which is pretty good,” SIIA 2022 IMPACT Award winner Matt Ausloos, manager of publishing for the American Health Law Association, told me recently. “That happens when we release a podcast around a late-breaking event—and this is health law so there have been a lot of those lately.”

Ausloos transformed what was a fledgling idea—a podcast which produced only 17 podcasts in FY 2019—to a “robust content offering that released two episodes per week on a regular schedule, totaling over 100 episodes in FY 2022, and driving thousands of dollars in podcast sponsorship revenue.” As producer, he does all the technical details, working with colleagues and myriad speakers to curate, record and edit high-quality content for a significant following.

He also manages the volunteers and content produced by AHLA’s 17 Practice Groups. This involves roughly 200 items of content per year that must be acquired, edited and published. He also innovated their most popular magazine feature, Top 10 Issues in Health Law, into a multi-channel experience, releasing 10 podcast interviews with the authors—and following up with video versions on their YouTube channel. In addition, he pursued a series of diversity-focused, cross-association podcast collaborations for a series called Career Journeys in Health Law.

In this second Q&A in our IMPACT Awards series, Ausloos talks more about his podcast work:

Ronn: I was really impressed by your work with the podcasts. Can you talk a little about that journey and where you’ve brought it to now?
Matt: Our Speaking of Health Law podcast channel started early in 2018. We just had like one podcast per month, maybe two. The onset of Covid is really what catalyzed our podcast channel. We’re an association dedicated to health law professionals. Most of our membership base is attorneys, but we also serve anybody who works in the health law field. so when the public health emergency was declared and the government was issuing regulation after regulation—and everything was so uncertain—we needed to get information out to our members and the public as quickly as possible. Literally beginning in March 2020, our podcast channel exploded, and we went from one or two per month to several per week. It was just the best way to get that timely information out to as wide of an audience as possible as quickly as possible.

And how did that influence your business model?
Matt: That harnessed things a bit because we started bringing in more sponsorship of our podcasts, and the pandemic showed us what our business model was going to be. There are so many ways to do it. It’s kind of what works for your organization within your content strategy. We rely heavily on sponsorship and sponsor support and have had consistent growth in sponsorship revenue YOY… Our sponsors actually work with us as content partners and developers. We allow them to develop what the topic is, and go out and get the speakers that they want subject to our approval. I work with them to guide the process and set the standards. But I do give our sponsors and our speakers a lot of leeway because they’re the experts in the field. And I think that’s really attractive to them.

That makes a lot of sense but does it ever cause problems for you?
Matt: It’s rare. There have been times when we’ve had to pivot on a topic with a sponsor because they may have veered into advocacy. We are strictly non-advocacy and non-partisan; we’re an educational organization dedicated to educating people on health legal topics, and those are just conversations that you have to have. We don’t allow more than one person per organization to participate. So there are some red lines. We give them latitude, and we haven’t, by and large, had a whole lot of issues.

What stands out that you’ve been working on recently?
Matt: I’ve been working with an attorney—she’s a long time member of AHLA and specializes in women’s health—on a series of podcasts, called After Dobbs, which is the Supreme Court decision back in June that overturned Roe v Wade. It had massive implications, obviously, and it’s something that our members need to be aware of. We were proactively looking for people, and she pitched us some topics. I literally recorded a podcast with her early today, where she interviewed a physician who specializes in reproductive medicine. We also did a podcast with her on providers and women’s health. We’ll also do one on the impact on underrepresented communities, and one on privacy. So it’s all about finding those synergies; when you can, you can create really good content. I try to maintain an open door policy [for ideas].

And you do all the technical stuff?
Matt: Yes, all the setting up and recording. I do have a colleague who helps with content development at times, but otherwise, I pretty much do everything. That’s how it is with small associations. People tend to wear many hats. In addition to the podcast, I’m associate editor of our magazine and manage all the practice group publications. Our practice groups are volunteers who, based on a certain practice area within health law, [help us]. So we have a fraud and abuse practice group that deals with fraud issues, a labor and employment group and so on.

Do you appear on the podcast?
Matt: No. There’s a pre-recorded message that my colleague does for us. I refer to her as the voice of AHLA because she appears on every podcast intro and outro. She actually also developed the music for me. If it’s a sponsored podcast, then she records a special sponsor message at the beginning which gives a little description of what they do. I’m totally behind the scenes. Again, we give a lot of latitude to our sponsors or members who are hosting, and [encourage] involvement from our practice groups.

How long are the podcasts typically and how do you measure them?
Matt: They vary but generally anywhere from 25-45 minutes, based on the conversation. I almost never edit the podcast for time because, to be frank, I don’t want to butcher the audio and make it sound unscripted. If people are listening and they’re ready to tune out, they’ll tune out anyway. But I like to just let the conversation go to its natural conclusion. We use Buzzsprout which is a pretty popular podcast hosting platform. It tracks the stats for us.