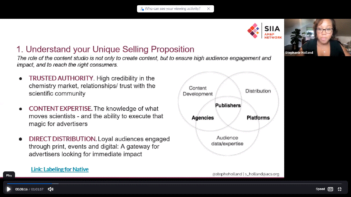 “With our publications, we also have the content expertise. I know authentically what is going to engage our audience, and so being able to sit between knowing content development and being able to distribute it across our platforms and channels—and really knowing a lot about our audience data positions publishers to be best suited to do this, even better than agencies.”

In the face of the pandemic and the cancellation of so many in-person events—meaning finding new ways to engage your advertisers—having a content studio became a huge positive for ACS. And as Holland describes, it could be replicable for other publishers, no matter what size you are. But like so many other revenue initiatives, it starts with knowing your audience.

“We’re certainly trying to scale and offer audience solutions for our advertisers,” she said. “They have buying power, and so I’d encourage you, if you don’t know a lot about your audience, you want to. Because we’re really selling access to audience, and that really takes all shapes and sizes in terms of the content that we produce.

We certainly believe that we’re platform agnostic in terms of what something has to look like. We do native branded storytelling, interactive quizzes, podcasts; it’s just really talking to clients about who they’re trying to reach and what are the best channels and solutions.”

Here are some suggestions Holland offers for those wanting to start a content studio.

Understand your unique selling proposition. “As publishers, we really sit in the middle,” said Holland. “[While agencies] can do research, create content and branding campaigns and such, when it comes to the distribution, they have to rely on publishers like ourselves and associations. So really that’s where the unique selling proposition for publishers and even more so with associations [comes in], where it’s within our DNA to know a lot about the constituents that we serve and have become trusted authorities. We have that tangible member benefit.”

Find the right business model. This may be determined by your size, Holland said. At the beginning, ACS had to rely on consultants like Mike Winkleman and Krystle Kopacz. Her first hire for BrandLab was an editor because she needed a “journalist or science writer who understood how to speak to this audience.” Then came an account manager and half of a marketing manager. “As we started to scale, we had to refine and prioritize—what are the products that we’re going to sell and we started with packages,” Holland said. “But as we’ve gone on, everything tends to be very, very custom. So [that’s when] we brought in an account manager.” She said while the editor came up with the ideas to land a client, the account manager provided the glue to keep them. “That was something that I didn’t recognize right away, but once I did that certainly helped us with renewal business,” Holland said.

An art director and another editor and a production editor followed, as revenue began to come in. There will be ebbs and flows to the business, however, she warned.

Understand your infrastructure and processes. Know your workflow, Holland advised. It was important for ACS to understand their workflows to make sure that they were being as efficient as possible. Where are the bottlenecks? “In the beginning our editorial was really good,” Holland said. But then she saw that they would need developers and art directors, and a handoff to sales at some point. She said that using your own editorial people might be an option for an organization less church-and-state than they are.

Map to margin.  There’s a worksheet that ACS uses now for every project when they are pricing it, a template that tells them what they’re trying to achieve, the goals and objectives, and who’s the target audience. They try to estimate the number of hours it will take to say, edit a white paper, or if a designer is needed, or if the creative will need to be outsourced. “For new projects we will also do postmortems,” Holland said. “Did it feel like we charged enough for that? That helps us to stay honest in our pricing for products that we’re trying to do at scale.”

Provide packages and custom offerings. Charge. For. Everything. For Holland, it’s a cautionary tale. “In the beginning, we gave a few things away and sometimes you have to do that as you’re ramping up, but now we literally charge for everything. For example, there’s a lot of discovery work that you’re doing when you’re trying to figure out what type of content solutions you want to ultimately create, and so we do content audits. In the beginning, we didn’t charge for that; we just did it for free. But that was lots of time that we weren’t actually even capturing on our margins document and so. Now we charge for a content audit. That’s also been a way to offer that to a client who may be on the fence with us. Yes, I want to do a content program with you, maybe even a very lucrative or expensive content program, and they may be a little bit gun shy about that investment.” Holland can then offer that money back to them if they sign on. She warns that if any multimedia project is involved, price accordingly. “Doing videos [or anything] interactive can be very, very expensive to do… Then we tell them that the timeline is going to be about 2-3 months in terms of promotion, so they get an idea of what they get that’s tangible. But as I said, most of this ends up being custom; this is just a framework for them to have something to respond to.

Don’t forget distribution and discoverability. Holland said don’t be afraid to turn down work if it’s not financially viable. She gave an example of Xerox only wanting to spend $10,000 with them. ACS could’ve done something small for them, “but we couldn’t do any distribution, so we turned that business down. At the end of the day, they’re going to be looking for return on investment and so without that distribution built in, you will not be able to prove that.” She added that sometimes, if the content is already there, they can just charge for the distribution.

Demonstrate results. While they do benchmark results—it looks great to show 3,100 page views, for example—what does that mean, asked Holland. “So we benchmark it against the articles that our editors are producing organically as well and show them that. By distributing the content, you’re more likely to have a higher range in terms of what we do organically. We also will show them all the promotional assets. How did people get to the site? What were the top drivers? How do they get shares?

Be true to your readership. ACS was doing a custom content campaign that was very large with an article every other month that they shared and distributed across all their channels, including social. But then the client said, “You need to take the word ‘chemicals’ out because it’s a bad word.” Holland paused and smiled. “Well, not to a chemist. So that was something where we pushed back. That was a very good cautionary tale. For me, I will always be true to our audience. I will always produce content that our audience is going to love because that gets the ROI. You need to put your audience first, understand what their pain points are, what the hot topics are that tend to do the best.”