This is the second article in our series on the 2022 Neal Award winners—what makes them special, what’s replicable, and what lessons we can learn from them. BioPharma Dive senior editor Ben Fidler had followed cardiologist Sek Kathiresan for some time before he correctly sensed that “the moment was right” to write a profile.

Industry Dive won 10 Neal Awards this year. When you read one of the winning articles—Heart Attacks Struck Sek Kathiresan’s Family. He’s Devoted His Life to Stopping Them—by Fidler, you can see why. It reads like a short story, with emotions, plot twists and varied time intervals.

Fidler, a BioPharma Dive senior editor, spent months on the story, which focused on the physician-executive behind Verve—a biotechnology company created with a singular focus: to protect the world from heart disease. Through various conversations, Fidler learned that Kathiresan’s brother, uncle and grandmother died of heart attacks, and how those tragedies shaped his mission. He also learned of the “drive and vision that drew other researchers to Kathiresan’s side.”

My father and uncle died of heart attacks at young ages, so the story really hit home for me—as I’m sure it must have for so many others. I reached out to Fidler, who was on vacation in Rome at the time, to talk about the article and Industry Dive’s commitment to great journalism. Here are his emailed responses.

AMPLIFY: How did you come up with the idea? Did you know the amazing story you had or did a lot come out later? 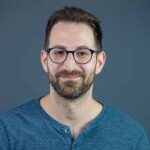 BEN FIDLER: I’ve always found personal profiles to be the most rewarding and impactful stories to write. People love reading about people, especially when those stories are honest and show them windows into humanity that they can relate to. But they have to be about the right people, at the right time—and I felt those factors aligned last year with Sek Kathiresan.

I’d been thinking of profiling Sek ever since I saw he was leaving cardiology research to start a company. I knew his reputation as a researcher and found it fascinating that he’d make such a risky choice, leaving his profession to run a startup with such a bold plan. I wanted to find out why, and through that figure out what kind of person he is. I thought the moment was right when I saw that his company was going public.

I didn’t know where that story was going, though. Everything came out through months of interviews. I’m sure other journalists can relate to this but, there are moments in the middle of an interview when you know you’ve got a great story. In this case, those moments happened many, many times. I felt like it was my responsibility to turn what I was hearing into something deep and truly compelling to read.

The childhood pictures and the video of Kathiresan accepting the Curt Stern award from the American Society of Human Genetics are powerful. Did it take a lot of effort to acquire those?

For profiles to be as powerful as they can be, the subject has to be gracious with his or her time and willing to be vulnerable and honest. It’s a lot to ask of someone. You have to earn their trust and respect. Part of that is getting to the point that you’re asking someone for personal photos, which are, of course, a delicate subject. With Sek, I knew the types of photos I was looking for. After we’d developed a rapport I explained why I thought they’d be helpful and how they’d elevate the story—while being very clear that anything that makes him uncomfortable is off limits. Sek, to his credit, took those ideas to heart and immediately shared very candid shots. I was pleasantly surprised. The video I found through my own research.

On a bigger scale, can you talk about how you’re allowed the time to work on stories like that? Does that define Industry Dive’s commitment to editorial?

There are always trade-offs when someone has to cycle off of daily coverage to do something bigger. In our case, because we have a small team, it means others have to pick up the slack quite a bit. But we all know that and aspire to write great stories. So when someone has an idea in the works, we come up with a plan to give them the time they need to execute efficiently. And I think that goes for other publications at Industry Dive, not just BioPharma. Many journalists I’ve spoken with here want to write standout stories, not just daily churn.

Last one. This article isn’t what people think of when we say B2B. It’s emotional, heart-tugging (excuse the pun) and works on many levels. Is it encouraged there? Do you get more latitude as a senior editor? Must be good for writers to see they can work on stories like that.

I would say that journalists here, from entry level writers on up, have the freedom to follow their instincts. As writers for a B2B publication, we have to have business angles in our stories. But business stories can be elevated to have so much more to them, and we are absolutely encouraged to get to those heights. As I reported this out and saw the story getting bigger, my colleagues pushed me to keep going and make it as great as it could be. We hired a photographer. Got the design team involved. It turned into a significant effort. As a senior editor, I may have gotten more instant trust in the idea, but this story could’ve been pursued by anyone who went after it.

See the first article on the 2022 Neal Award winners—about Endeavor Business Media’s FleetOwner—here. We will also have an Editorial Council meeting on Aug. 4 with two other Neal Award-winning authors. Stay tuned for details.