“You want to leave room for magic.” 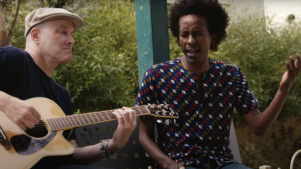 That line was uttered this week by independent filmmaker Drew Stone following a showing of his latest documentary, The Jews and the Blues, at a festival called JxJ here in Washington, D.C. The question was how scripted his 9-day trip to Israel was to film six famous blues players there—including Ethiopian-born Gili Yalo. (The two are pictured here.)

The “magic” he was referring to materialized in a couple places—on a visit to the Hebrew Music Museum where a woman working there showed him these incredible, old instruments; and dancing in a famous square in Jerusalem on the last night. He said his time was tightly scripted, but as a filmmaker, you have to leave a little time for some unscheduled things to happen. It’s a tough balance.

It reminded me of things we plan—our in-person events, our webinars, even our meetings. Are we allowing time and space for our “magic” to happen?

I say this because it’s one big reason that we should attend in-person events again when we feel comfortable—like our AMPLIFY conference, June 22-23 in Washington, D.C. (We have a universal track for B2B and niche publishers plus an association track.) Events produce the unknown—all mostly good. We meet people we wouldn’t meet otherwise, hear about ideas that are new to us, and put ourselves in an atmosphere where we can experience serendipity. (The word comes from a fairy tale and thus has always been thought as a “fortunate” thing.)

Knowing that I probably did not just invent this, I googled planned serendipity and sure enough, University College London (UCL) conducted a 2012 study “to design interactive systems that harness its power. By collecting and analyzing people’s ‘serendipity stories,’ researchers…hoped to design an interactive system that makes us more prepared for recognizing serendipity when it happens and, crucially, supports us in acting on it.”

Stories told to these researchers included:

A researcher said: “By looking for patterns in people’s memorable examples of serendipity, we’ve found that it is more than just a ‘happy accident.’ It also involves insight—an ‘aha’ moment of realization.” There’s even a humorous video on the UCL site of the interviewer asking students, “What is serendipty?” “Is it Latin?” someone asks. They list three elements:

“The people we interviewed benefited from their serendipitous experiences, not only by enhancing their knowledge, but also by saving time—serendipity propelled the interviewees forward at a faster pace than they would have travelled otherwise,” said Stephann Makri. “Everybody can benefit from serendipity if they remain receptive to it and ready to act on it when it happens.”

Of course, we have to put ourselves in places to encounter it. Working from home now may eliminate some of those chances for serendipitous happenings in our lives. (Though it’s hard to beat working from my patio on this beautiful morning.) I used to have interesting discussions with a blind man I often encountered—by chance—on Metro each week, making his way to work like the rest of us. It’s easy to see why many bosses are pushing for some kind of hybrid work experience.

Will it happen at our AMPLIFY event or at the next Editorial Council online meeting or at the INFO Local dinners that we’re hoping to bring back? Hopefully, yes, if we plan it right. My colleague Jen Smith, who is doing a great job planning AMPLIFY, is scheduling plenty of time for those interactions with roundtables, no-speaker lunches (what a concept!) and time with the exhibitors. Personally, I can’t wait.

The UCL researchers were working on a mobile app aimed at creating opportunities for people to experience serendipity, but I can’t find any updates. They might have decided that an app might not be needed for this one.