Events were certainly top of fold on the first day of BIMS 2020 yesterday, with a very popular Connections and Cocktails. Frank Salatto of Government Executive Media Group spoke of the success they’ve had pivoting to virtual. “There are new opportunities in the data you can collect and the leads you’re able to deliver,” he said. Here are some of the virtues of virtual events as we look to 2021.

Opening day keynote, Bob Bejan, corporate vice president of global events, studios and marketing community for Microsoft (pictured here in his studio), told us about a conference—Microsoft Ignite—that they staged this year, virtually, of course. Last year’s attendance in Orlando over 5 days was 24,700.

“This year we had 266,000,” he said. “Just the idea of the inclusion of that and what that means in terms of the audience and who you can reach, not just by scale but to effect change and influence people” is huge, he said. “What does that mean in moving forward?”

Most of us are much more micro than Microsoft, so forget about those sheer numbers. But exponentially, getting 10 times your audience—or even 5 times—could be realistic moving forward. Here are some successful takeaways. (A few are from an excellent blog post by Omeda.) 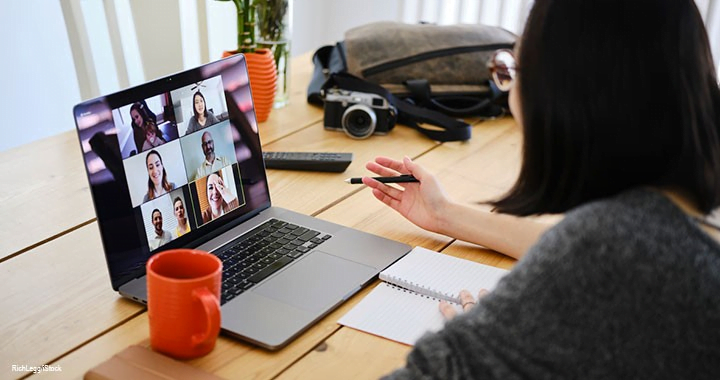 Be innovative. Wine tastings at virtual events aren’t really new anymore, but they still work. We just had a sommelier talk to about 40 of us for BIMS 2020 about holiday wines and much more, and good vibes bubbled up. The National Speakers Association held a series of “digital dine-arounds,” virtual dinners where members could get together with a top official from the association. It was a part of NSA’s INFLUENCE 2020 conference—and just one way that organizations can excel in a virtual format. Another group here, Association Media & Publishing, did something similar with the second-day morning of their conference. You could make scones with a Board member, take a scenic walk with the President and other feel-good activities.

The event isn’t over until we say so. “Your virtual events do not have to be a singular point in time… Make the event a launch point for engagement and interest from your audience.” There’s no reason anymore that your event has to be just 2-3 consecutive days. Do a special hour of content every Monday afternoon and call it your Magic Monday conference. BVR’s Divorce Conference scheduled sessions weeks before and after. Instead of their annual conference, the United Fresh Produce Association created United Fresh LIVE! 365, a year-round online platform featuring a permanent expo, social gatherings, on-demand education, webinars, conference programming, and networking opportunities for the global produce industry. “We basically built a year-round convention center,” John Toner, VP of convention and industry collaboration, said.

Invest in lighting and tech for your presenters at home. We actually did see a couple speakers this morning whose lighting could have been much better. It makes a difference. It’s hard to work out though. One of the speakers was presenting from his parents’ basement. Maybe just best to touch base a couple days before and have them see the light. Writes Omeda: “The speaker will feel more in the moment during the presentation and the video production afterwards will be a better quality.” Bejan also wants speakers to be more cinematic than theatrical. “It’s like you’re having a one-on one conversation with each person in that audience.”

Use polls and other interactive features available to drive engagement. “We have watched polls keep the audience engaged throughout the virtual sessions,” writes Omeda. “Polling the audience is a great way to get the pulse on the audience and to keep them engaged in real-time. It helps to foster the sense of the audience coming together.”

Less might be more. This may be the hardest concept to accept. We’re all taught that the more value you can convey the better. But Zoom fatigue is real. “Instead of packing in many sessions and multiple panels, take into account exactly what your attendees are looking to learn and hear about,” Omeda writes. “Identify what will benefit them in order to make the event most valuable.”

Go global. There should be no barrier besides time difference why you can’t have a bigger global audience, if that works for your niche. For Pro Farmer’s first virtual Crop Tour in August, four online, 90-minute broadcasts brought in more than 18,000 total viewers coming from all 50 states and 12 countries. (Historically, the typical audience across the four days and seven Midwest locations has ranged between 2,000 and 3,000.) “You can’t get that kind of reach in person,” said Joe May, marketing and sales director, indicating that Pro Farmer will most likely keep some of that digital component in future Crop Tours.

“If you think how early we are in the medium, the signs are very encouraging about what’s coming out of this,” said Bejan. But this is definitely a practice-makes-perfect affair. Asked about Microsoft’s upcoming partnership with CES on their huge 2021 show, Bejan said, “Everything we’re doing in CES is the sum total of every mistake we’ve made the last eight months.”