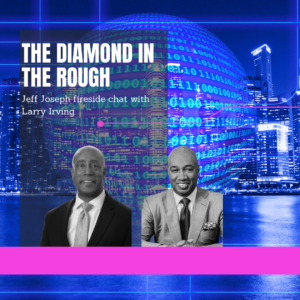 SIIA hosted another Tech& program on May 23rd. The Diamond in the Rough: Chiseling 21st Century Learners in a Broadband-Enhanced World brought together expert guest speakers on the latest ed tech issues and how the next generation of learners could grow in a more equitable broadband world. Watch the program here.

To kick off a webinar “The Diamond in the Rough: Chiseling 21st Century Learners in a Broadband-Enhanced World,” SIIA President Jeff Joseph spoke with Larry Irving—president of the Irving Group, Internet Hall of Famer, and producer of the first empirical study proving the existence of the “Digital Divide,” a phrase he coined.

“What frustrates me, and kind of frightens me, is that if it wasn’t for the pandemic, we wouldn’t have addressed those issues. The only thing that got this nation really focused on it was the pandemic, and I think all of us who are on this call, remember that iconic photo of those two young Latino girls sitting in Silicon Valley, home of some of the wealthiest people in the world—more technology than any place on the planet—and the two little girls trying to get their school work done by sitting outside of Taco Bell,” Irving stated.

“I went to Stanford up the street, where there’s all kinds of technology and all kinds of wealth. And how do those little girls get to a Stanford? How did those little girls get to San Jose State or UC Berkeley or Santa Clara College if we don’t make these investments today? So I am glad we’re making those investments, but sad that it took a pandemic to really focus on the societal inequities that we have.”

Irving pointed to a report last year that showed 40 percent of rural black southerners don’t have access to broadband compared to 18 percent across the nation and 23 percent for white rural southerners.

The bipartisan infrastructure law is designed to help resolve this and Irving believes we are on the right track.

“I think the Congress and the White House administration got it pretty close to right,” Irving said. “In my private conversations, I told folks that my only concern about what the administration is saying and doing is that this will end the digital divide. It won’t. It won’t come close. It will close some of the gaps a little bit further down the road. But I do worry that by saying, ‘connect everyone and we’re going to end the digital divide, and we need every American connected,’ we’re raising false expectations. This is not enough money – it’s probably a third to a quarter of the money needed to do what’s needed across this country. That said they’re doing it right.

But let’s understand something fully. The failure for us to fundamentally address the problems of digital divide isn’t a failure just at the federal level. It’s also been a failure at the state and local levels. Almost every policy maker in America deserves some blame for where we are, as a nation with regard to having communities or individuals or whole swaths of the nation that are under prepared for this digital revolution that we’re living through.”

Because the digital divide was almost co-opted, we were able to combine the digital divide and digital poverty but, the biggest indicator of who’s not connected to capacious broadband isn’t geography, its income and if we don’t focus on that, on the folks who are really poor we’re going to have a problem.

We can get back to a scenario in some states where we only look at the unserved because of geography, that will still leave millions of Americans across this country underserved because of income. If we do both, it’s great for America. If we do only one, we compound existing inequities. If you already have a low education, low income, live in a community that’s at risk and then you’re not connected to the Internet, all of your other problems are compounded.

“You need folks on the ground who understand what’s really happening in those communities, who are trusted [and who can] serve as advocates to folks… We need to figure out why these gaps exist, and we need to address them, and that’s going to be done at the local level. So yes, the funding is going to come down from the feds, but the actual work and implementation [will] be done in the localities, in the states.”