This article was written for us by Al Rickard, CAE

Contributing to the social good is a mantra for today’s organizations, including associations, for-profit companies, and media organizations. 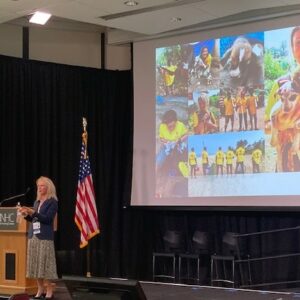 Elizabeth Green, CEO and founder of Brief Media, told a fascinating story about a partnership to advance an important cause in the opening keynote address at AMPLIFY, the annual conference of the Associations, Media and Publishing Network.

Entitled “Mission Critical: Social Good as a Core Business Principle,” her talk was an inspiring example of how serendipity led to a meaningful and productive business relationship that makes a difference in the world.

“Our vision is to guide the most critical decisions in veterinary medicine,” Green said, explaining that Brief Media is a leading veterinary publisher that develops practical, peer-reviewed educational content and point-of-care tools for more than 259,000 veterinary professionals worldwide.

Supported by a team of practicing veterinarians, the company has unique expertise that it uses to help eradicate a deadly disease through the Mission Rabies project, a partnership that grew out of a chance encounter at a conference.

“I was in the United Kingdom at a conference having lunch with one of our business partners,” Green recalled. “He happened to mention that between 50,000 and 100,000 people die every year of rabies, predominantly in Africa and Asia, and that more than half of them are children. It’s not an easy death; they die in isolation without their families. I was horrified when I heard that number. He then told me about a nonprofit organization called Mission Rabies.”

Mission Rabies traveled to small villages in Africa and found that if it could administer rabies vaccines to at least 70% of the dogs in that community; human mortality from the disease dropped by 95% within five years.

Green learned that very few people in the United States knew about Mission Rabies, so she signed an agreement with the organization and began promoting it to U.S. veterinarians. The success of the program led to a sponsorship from Merck Animal Health, which provides many of the rabies vaccines for free and is now also funding many of the in-person missions by U.S. veterinarians who travel to villages in Africa and Asia to vaccinate dogs.

“We were able to take the knowledge that we had in veterinary medicine use it to save human lives,” Green said.

“So why social good?” Green asks. “There is a lot of pressure right now on organizations to do good in the world. Believe in what you’re doing. Make it matter. Make it about something that your stakeholders care about that will be sustainable over a long period of time. Be authentic and make sure that it’s not just a check box for doing something good.”

The Power of Storytelling

Green explained that her company used a wide range of media—blogs, newsletters, podcasts, social media, etc.—to publicize the success of this partnership.

“But the most effective tools were the videos of volunteers when they come back from their projects talking about their experiences,” she explained. “It wasn’t Brief Media, our sponsor, or Mission Rabies telling the story. These were actual veterinarians who had been out in the field telling the story.”

Green noted that partnering with an established organization was the key to success.

“Mission Rabies had expertise and the infrastructure in place,” she said. “So it was easy for us to partner with them because they already knew how to navigate the logistics. They also had relationships with the governments in each of the countries. Then we have the relationships and access to all of the U.S. veterinarians that that they didn’t have. So we were able to send more people to the program and they were able to do more drives.”

Al Rickard, CAE, is president of Association Vision and a member of the AM&P Associations Council Executive Committee. You can reach him at arickard@associationvision.com.