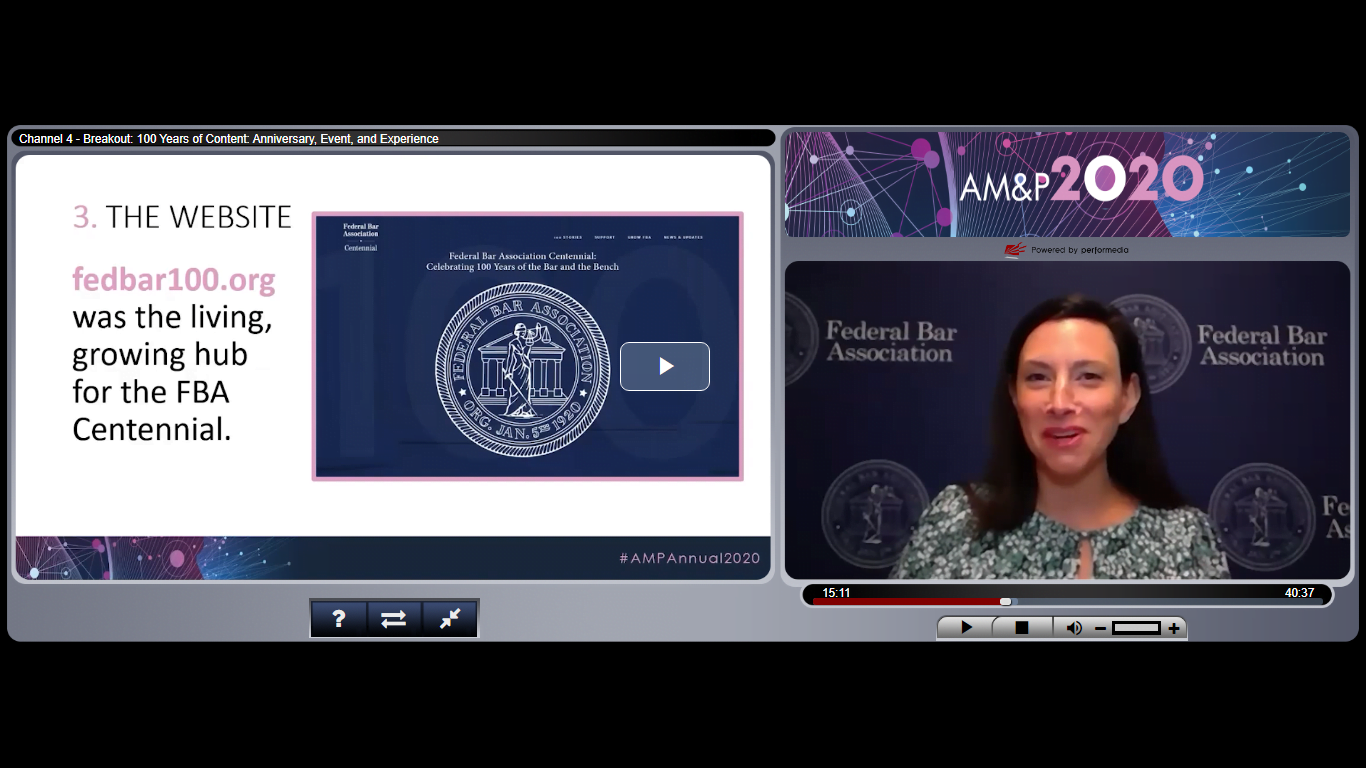 In discussing why the Federal Bar Association decided to put together a most impressive, coffee-table book to be the centerpiece of their centennial anniversary last year, executive director Stacy King flashed a 2021, better-days-are-ahead smile.

“Attorneys love books. They really do. Since we’ve been doing all these Zoom calls, I never realized how many of my leadership has just books on books behind them. Everyone has that prestigious bookcase with all of their books.

“The other [reason] was that when the party was over”—the FBA put on a big virtual 100-year celebration in September to replace the canceled March festivities that would have included welcoming remarks by Chief Justice John Roberts—“we really wanted to make sure we had something to celebrate, something about the bar for years to come. We also wanted it as a marketing tool to raise our profile. So we are actually in the process right now where we’re sending the book to all three branches of government, all the chief federal judges, so that every federal courthouse has a copy.”

This informative and entertaining AM&P 2020 session—we even saw a photo of Eleanor Roosevelt speaking at a war-time FBA luncheon with their first female president!—was titled 100 Years of Content: Anniversary, Event, and Experience. Chris Durso, associate vice president of content, MCI USA, joined King for the session. He collaborated with her and FBA on the project, actually becoming, in her words, the “FBA historian.”

“Every association has anniversaries, and they mean more than a date on the calendar,” King said. “Use them to boost membership and raise a little money.”

Here are more key takeaways from this session:

Start early. Things take time. And stay in charge. I just heard that a new Denzel Washington movie coming out was written in 1993. King said that they started talking internally about the centennial eight years ago. After a few years of not much getting done, she learned that doing it by committee wasn’t going to work here. “We started from the get-go about the book with feedback [from the committee],” she said. “We took that and decided to do certain things. We kept officers apprised and made volunteers feel heard, but then we went and did the right things for the organization.”

Celebrate your history. “Every association has anniversaries, 25th, 50th, some are up to 100,” King said, “so the idea is to really honor where you came from and celebrate. Honor past members. For us, so many are still engaged. We get a lot of turnover—chapter leaders change every year. We wanted to inspire current leaders and show how prestigious an organization they’re a part of. We also got the engagement of the federal community and brought them together.”

Think about outsourcing. The FBA has a “tiny staff” so King knew they had to outsource the work. “Look to have a good partner; it’s important to have someone you feel comfortable with [because you’re] trusting a vendor with your organization’s history. And you’re going to spend a lot of time together.”

Use it to build community—and membership. “We wanted to bring everyone back together,” King said. “Treat it like a reunion. Community is super important to us. We also used it to drive membership.” They started a campaign to drive past 20,000 members. “As an association anticipating change, we also started to talk about the future. In 2019 we adopted a strategic plan. What better way to get people excited about change than to celebrate where we came from. It was a way to set up changes and toast our 100th anniversary.”

Decide on a centerpiece. The first thing he discussed with King was, “How do we tell this story?” Durso said. “These are attorneys and judges who work for the federal government. We were really telling the story of the American century. So we took a mosaic approach. It’s a very handsome hardcover book.” There are listings of every national FBA president and where they worked, showing the prestige of the organization and giving a sense of impact.

Highlight your diversity. Prominently displayed in the book is the FBA’s first African American president, J. Clay Smith Jr., in 1980. There’s also that Eleanor Roosevelt photo and one of Elena Kagan at an FBA meeting. Durso and King did not speak about how to deal with a history that does not include any diversity. In that case, it would make sense to highlight the diversity that you have hopefully transitioned to now and your commitment in the future.

Think about your website. The FBA was in the midst of an overall website redo, and we all know how that can go. So King made the decision to launch a standalone site: www.fedbar100.org. “It became the hub for the centennial,” she said, “and gave us breathing room for the new [overall] site, which we actually launched on the exact 100-year anniversary date.” The fedbar100 site includes material from the book formatted as interactive timeline, profiles of FBA legends, and memories from past and current leaders. “They love to reminisce about the past,” she said.

Don’t be bashful. FBA used the new website for sponsorship and giving, approaching it in two ways. They set up a centennial fund within the foundation and then for the party focused on sponsorship. They asked for $100 donations for the 100th anniversary, and the past president issued a challenge for $1,000 donations. “We were able to raise the funds to cover the book,” King said. “And we used sponsorship outreach to cover the events we planned. I’m so glad we did the website as a standalone. Now it’s really a legacy site [and] another way to try to reach your members where they are. Some like the book, some like the website. We tried to capture all the voices and share with as many people as possible.” Added Durso: “The book was our stone tablet; the website gave us breathing room. We put voices there that we couldn’t put in the book.”

Be ready to pivot. This was everyone’s mantra for 2020, but it’s probably a good lesson for any time. “We had a whole weekend planned in March including a gala Saturday evening,” King said. They had not booked a Saturday night speaker deciding to “focus on the bar and who we are. Let the bar be the keynote.” That allowed them to come up with a plan b that actually transitioned well to the virtual world: a centennial video. “What better way to take the book and make it come to life than a video,” King said. “So that’s how the book became a movie, and the focus was on the association itself and not the speaker at the party.” Durso said that, for him, it felt like they “were producing a trailer for the book.” It allowed them “to take advantage of all the information and photos we found.” The video lasts about 17 minutes. “It’s kind of in the Ken Burns PBS model,” he said, with slow pans over documents and photos. “Every association has a story that can be told in more than one way,” King said.

Consider sending swag. I have read numerous success stories about sending swag in lieu of in-person event swag since the pandemic. The FBA adds another one to that. They mailed attendees to their September event swag bags that included the book, of course, plus centennial pins, chocolate, and movie popcorn with a sticker on it that told them when the movie premiere would be. Part of that Friday night virtual celebration also included a Q&A between King and Durso. “Did you know that the first FBA president was born before the Civil War?” Durso asked, flashing his new historian credentials. “And the first African American member, Louis Mehlinger in 1944-45, was the son of a freed slave from Mississippi.”

Ronn Levine is the editorial director of SIIA and can be reached at rlevine@siia.net