This is a special article written for us by Jen Silber

In 2021, SIIA introduced a new award to highlight the outstanding work of members committed to antiracism and elevating equity across their organizations and the associations and industries they represent. 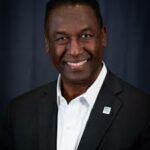 At AMPLIFY 2022, representatives from a couple of these organizations offered insights into how they are driving meaningful progress in advancing diversity, equity and inclusion.

The session, “We Are the Change Makers: How Association Pros Are Driving Multilevel DEI Progress,” featured Bibiana Campos Seijo of the American Chemical Society, vice president of C&EN Media Group and editor-in-chief of C&EN; and Billy Williams (pictured), executive vice president for ethics, diversity and inclusion at the American Geophysical Union. AGU was the recipient of the inaugural Equity Award, honoring an individual or team demonstrating significant progress and identifiable achievement toward efforts related to advancing DEI.

The session was moderated by incoming Associations Council President Stacy Brooks Whatley, director of marketing and communications at the American Physiological Society and editor-in-chief of The Physiologist Magazine.

The discussion was thorough and wide-ranging, with the presenters generally agreeing on five essential concepts:

No one can do everything. But everyone should be able to do something.

Williams noted that AGU’s work happens in partnership with other institutions and organizations. AGU shares its goals and data with anyone who needs it, no matter where they are in their DEI process. One of the key elements of DEI success, he said, is multi-institutional partnerships.

Campos Seijo gave credit to her team and said the Trailblazers program, which highlights rising ACS members from under-represented communities. It happened because the magazine staff felt it was important to do—not because she told them it needed to be done. The ACS inclusivity guide was developed by a committee of volunteers. Because people felt strongly about getting it done, they were able to do it.

This is work—it will take time and energy. Don’t expect overnight results.

Brooks Whatley cautioned people not to be discouraged if their efforts seem smaller or slower than the programs being highlighted at AMPLIFY. “The programs that you’re putting together and that you have passion for are what we should be celebrating,” she said. “You don’t have to be a rock star.”

For AGU, antiharassment conversations began in 2015 internally and with other scientific organizations.

It’s a large task to overhaul an organization. One way to make it happen is to break DEI efforts into small practices that can be incorporated into all aspects of the organization’s work.

“One of the things I’m proudest of at AGU is that we have a policy-based foundation that helps provide the coverage for everything we do,” Williams said. If an organization’s mission statement mentions the principle that DEI is an essential element of success, staff don’t have to ask for approvals or permission when doing something in a new, more inclusive, way. “Not only did we change our policy, but we changed our practices; this is one of the first big changes toward cultural change.”

Campos Seijo said ACS develops its editorial calendar with a diverse range of feature subjects in mind. “There’s a standard that we need to set for ourselves, and we need to apply that consistently.”

Talking about progress is a critical aspect of making progress.

There needs to be a balance between words and actions. If you work hard to advance equality—but no one ever hears about it—you’re really only doing part of the work.

Brooks Whatley noted that SIIA commonly invites outside experts to give talks about DEI work, which glosses over the work being done by member organizations. Taking the time at AMPLIFY to let organizations trumpet their DEI work gave them a chance to celebrate achievements and inspire others by letting people see what’s being done and what can be done.

Stick to your principles.

There may be negative reactions to the visible changes, which is why it’s helpful to have diversity principles stated in your organization’s mission statement or core values. “When it comes to DEI, I don’t think you should need to have a business case,” said Campos Seijo. “We’re going to continue to do it because it is the right thing to do.”

Jen Silber is senior editor at American Staffing Association. She began her career with a foray in dot-com publishing but has now been working as an editor in the association world for nearly 25 years. She’d generally rather be where the weather is cold.